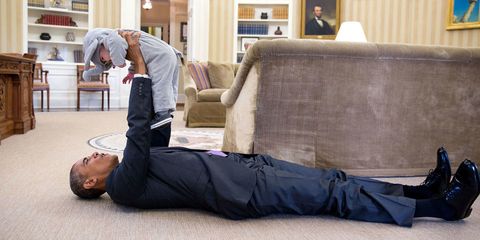 In honor of the Commander in Chief's 56th birthday today, take a look back at his sweetest and silliest moments behind the scenes at the White House and beyond.

Playing golf on Martha's Vineyard in 2014

Reading to kids on Easter in 2013 with his dog, Bo

Obama Awarding Biden with the "Highest Civilian Honor" in 2017

Kitesurfing on vacation in the British Virgin Islands in 2017

Playing bumper cars with Sasha in Des Moines, Iowa in 2007

Celebrating his 43rd birthday in Illinois in 2004

Watching the Super Bowl in the White House theater in 2009

Looking back after his swing in Oak Bluffs, Massachusetts in 2013

At an election night rally at St. Paul, Minnesota in 2008

Cracking jokes with the Pope Francis in the Vatican in 2014

Blowing bubbles at the White House Science Fair in 2016

In an "I got your nose!" moment with Michelle Obama before welcoming the Prime Minister and First Lady of Singapore to the White House in 2016

Flexin' with Michelle at the Easter Egg Roll in 2015

Meet a casually-dressed Prince George at Kensington Palace in 2016

In Wilmington, Delaware in 2014

Getting low with a friend in the Oval Office in 2015

At Maumee Bay resort during a campaign stop in Oregon, Ohio in 2008

Tying his green tie for St. Patrick's Day at the White House in 2015

Matching with VP Joe Biden at the White House on St. Patrick's Day 2015

One with nature at the Koko Head Crater Trail in 2015 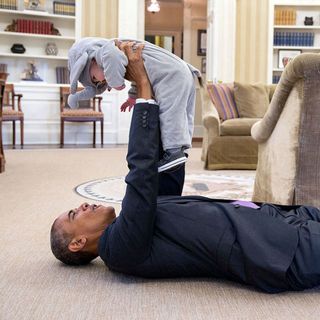 This content is created and maintained by a third party, and imported onto this page to help users provide their email addresses. You may be able to find more information about this and similar content at piano.io
More From Politics
How to Demand Justice for Adam Toledo
Daunte Wright's Death Sparks Protest in Minnesota
Advertisement - Continue Reading Below
41 Surprising Rules First Ladies Have to Follow
Asian American Women on Where to Go From Here
Syrian Journalists Reflect on a Decade of War
How to Show Your Support for the AAPI Community
Activist Lydia X. Z. Brown on Disability Justice
Elisa Crespo: "I'm Not Here to Make History"
What We Know About the Georgia Spa Shootings
Dianne Morales Has Never Listened to the Naysayers