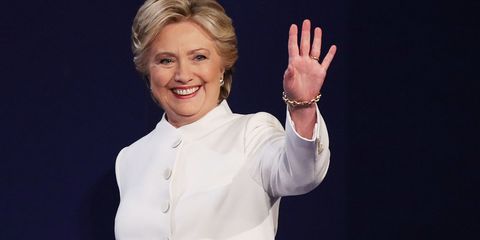 If she wins, becoming POTUS won't be the first time Hillary Clinton has broken down barriers and been a pioneer. Here are 11 other times she's already been the first to do something.

In 1969, Hillary was the first student commencement speaker at Wellesley College.

Hillary became the first FLOTUS to have an office in the West Wing.

In 1997, Hillary won a Grammy for the 1996 spoken word recording of her book, It Takes a Village, making her the first FLOTUS and first female politician to win a Grammy Award.

In 1998, Hillary became the First FLOTUS to be featured on the cover of Vogue.

Thanks to a 20-day overlap between her time as First Lady and New York Senator, Hillary became the first person to serve simultaneously in the executive and legislative branches.

Starting with her senate campaign in 2000, Hillary was the first (and so far only) First Lady to run for office.

In 2007, Hillary became the first woman to be the frontrunner for a major party nomination, though she eventually lost out to Barack Obama.

When Barack Obama named her Secretary of State, Hillary became the first former First Lady to serve in the U.S. Cabinet.

This year, Hillary became the first woman to be nominated by a major party for President of the United States.

Bonus: When Hillary was 13, she dreamed of being the first woman in space. So she wrote NASA a letter asking what she needed to do to become an astronaut, because she's Hillary Clinton.

"When I was about 13, I wrote to NASA and asked what I needed to do to try to be an astronaut," she said when she was Secretary of State. "NASA wrote me back and said there would not be any women astronauts. And I was just crestfallen." We've come a long way, Hill.

Advertisement - Continue Reading Below
Next
The Celebrity Presidential Endorsements Roll In 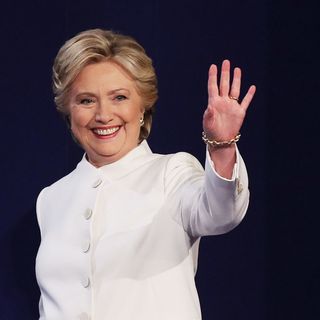 Advertisement - Continue Reading Below
Kayleigh Roberts Kayleigh Roberts is the weekend editor at Marie Claire, covering celebrity and entertainment news, from actual royals like Kate Middleton and Meghan Markle to Hollywood royalty, like Katie Holmes and Chrissy Teigen.
This content is created and maintained by a third party, and imported onto this page to help users provide their email addresses. You may be able to find more information about this and similar content at piano.io
More From Politics
Kristin Urquiza Wants Justice for COVID-19 Victims
A Breakdown of VP Harris's Net Worth
Advertisement - Continue Reading Below
WH Announces Removal of the Hyde Amendment
What Liberation Means This Juneteenth
Kathryn Garcia: It's Time to Step Up or Shut Up
A Valedictorian Speaks Out Against Abortion Bans
Standing Between Care and Violence
Seeking Healing a Century After the Tulsa Massacre
What to Know about Texas's Abortion "Trigger Ban"
A New Book Invites Us to Rethink Menstrual Equity