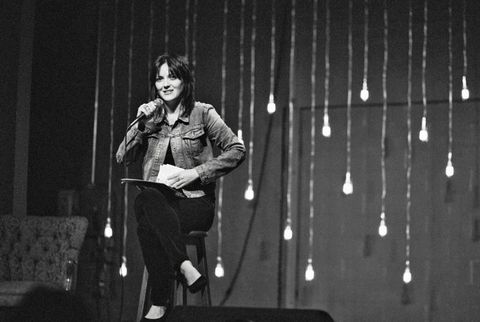 LIKE ALMOST 20 percent of women in the United States, Jen Kirkman won't be having kids. But a funny thing happens when the 38-year-old comedian tells jokes about her choice to be sans children: People think she's kidding, that it's just part of her act. Or they tell her she'll regret it.

But Kirkman, a regular on Chelsea Handler's Chelsea Lately and After Lately, is serious about living life on her terms. MC talked to her about her hilarious new memoir, I Can Barely Take Care of Myself: Tales From a Happy Life Without Kids (Simon & Schuster).

MC: So you never wanted kids? Ever?

JK: No, I never had the urge. I was born this way. Also, I don't want to sacrifice what I'd need to sacrifice to properly raise a child.

MC: Why did you write this book?

JK: I wrote it for other people in my situation so they don't feel so alone. I'm very secure in my decision—and nobody in my family is making me feel bad about it. The book is for those who are made to feel uncomfortable or bad every Christmas when they go home.

MC: You write that people—including strangers who see your comedy routine—often have some pretty strong opinions about your choice not to have kids. Give us the hit parade of what people say to you.

JK: The first one I always get, which I wanted to name my book, is: "You'll change your mind.'' Or people come up to me and say, "Who will take care of you when you're old?'' which I take to mean, "You'll die alone.'' My short answer to those people is, "Have you ever watched The Golden Girls?"

MC: Why do you think people won't take no for an answer?

JK: I think some parents think, Oh, having kids is so beautiful; I want others to feel the joy I do. On a bad day, I think I offend these people because they know how hard it is to be parents and wish they had known not having them was an option! With men, I think they just don't like a woman without a maternal instinct.

MC: But you found a guy who also didn't want kids and you married him.

JK: The marriage didn't work out, but since then I've met a lot of other guys who don't want kids. I tend to withdraw quickly if a guy wants a family. I don't want to waste his time.

MC: Do you think women who aren't mothers should get more respect?

JK: Yes! Or please don't assume that you know what I'm doing with my life. I tweeted about running errands one Sunday and somebody tweeted at me, "while you're strolling around we"—meaning parents—"have places to be." Sometimes I feel like if two parents were given $100, and a child-free person was given $100, everyone would assume that the parents would invest their money wisely because they're smart. And people like me would just go buy candy.

MC: You write about an older woman you revered when you were younger who worked next to you at a theater box office in Boston. She wore a tailored black dress and lacquered red nails and went to the theater in Manhattan every weekend. Was she your child-free inspiration?

MC: So when did you know you were a Miriam?