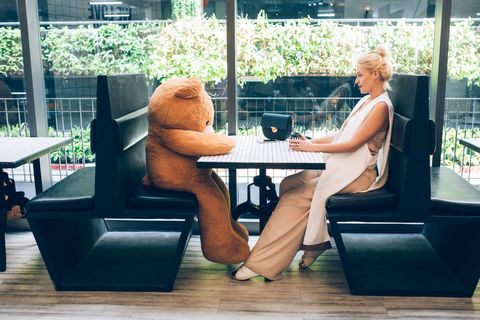 What if there were someone who could go on all your first dates for you? What if all that profile-skimming, right-swiping, text-flirting—all the time-consuming markers of online dating you already complain about—were nixed? Instead of constantly assessing matches, you'd say to your phone, "Siri, find me true love." And she would.

You'll soon be able to, according to Dr. Pedro Domingos, computer science professor at the University of Washington and author of The Master Algorithm: How the Quest for the Ultimate Learning Machine Will Remake Our World. The new frontier of online dating is moving away from the profile-centric model, he says, to an avatar that will essentially date on your behalf.

Here's how it works: The dating app on your phone right now is driven by machine-learning algorithms. "They learn to predict your likes and dislikes, your preferences, and your tastes from the information that you have given them," Domingos explains. Amazon predicts what books you'll like; Netflix suggests movies for you. Dating sites are, on some level, doing the same thing—just predicting who you'd like to date. "Every time you swipe left or right you're teaching the algorithm," he says. As the OkCupid states, it's "math in the name of love."

Instead of constantly assessing matches, you'd say to your phone, "Siri, find me true love." And she would.

And that algorithm will soon become an avatar that mimics and mirrors you—all on its own.

It's not such a far-fetched future, according to Domingos. This avatar of you, created and compiled by what he calls the master algorithm, could be a reality within the decade. "Already, companies like Apple, Google, and Microsoft are racing to build the best model, or digital version, of you that they can by using your smartphone," he says. (When reached for comment, Google, Apple, and Microsoft neither confirmed nor denied these efforts.)

Each company already knows a sliver of who you are. Bringing all the parts of you together—from your browser history to your online purchases to your banking info—can help create a complete picture of your life and persona. This model of you is "very faithful," says Domingos. "So much so that if the model of you had a conversation, you'd be like, 'Wow, this sounds like me!' Once the model is that good, then that model can start doing things on your behalf, like going on dates with people or interviewing for jobs."

For dating, this Avatar-You would do more than just go on a bunch of get-to-know-you coffee dates to weed out the losers. Instead, it would go on 1,000 dates with 1,000 other avatars—all in the blink of an eye. One million rendez-vous later, you've got a list of potential dates you could then decide to meet in person.

And we're not talking about that second-life kind of avatar dating where a 65-year-old cat lady in Des Moines goes on dates as her alter ego—a pink-haired space-pirate wench or an elfin fairy princess in a latex bodice. On iVirtual.com, a site that allows you to "meet, connect, and date in 3D," said avatar is really more like an animated Tinder profile pic.

"There are so many resources being put into this, and there's so much progress on the different fronts; the question is how well will it work," Domingos says.

Eventually, Google and other companies may pool their data to predict how you'll behave. "They found that predicting what social group you're part of is the most predictive of how you're going to behave in all sorts of different settings," says Domingos. The only reason your personal avatar hasn't happened yet is because companies have not yet been able to merge every data stream. No single company has all of your data, he says, "but they're each capturing more and more, and companies like Apple and Google, which own smartphone operating systems, already see a big chunk of what you do."

And despite being oversaturated with dating apps, millennials are actually a prime market for the constructed self of the avatar. With a seemingly infinite number of date options out there, "it becomes a burden to make that choice," Domingos says. "How do you find what you really want?" In the future, you don't have to take the time to paw through the multitude of choices—Cortana/Siri/Alexa will do it for you.

But not all proponents of dating apps believe dating avatars should be used in this way. "I think this kind of science is best used to rule out, rather than to find matches," says Eve Peters, founder and CEO of the Whim dating app (which has the goal of getting daters from text to meet-up much quicker) and former product lead at OkCupid. "Science and data and virtual reality will only get us 50 percent there," Peters says. "The reality of personal chemistry is so nuanced and so difficult to translate into workable data, difficult to articulate and identify. That's what the other 50 percent is: compatibility."

There are so many psychological theories about what makes two people click: everything from whether they're on the same Circadian rhythms to when their childhood traumas occurred. It may just be that this precise combination of mental and emotional factors cannot be quantified.

But hey, we're busy. And if you're feeling some swipe fatigue, the future may look a bit brighter. At least, Domingos says, "it will work much better than what we have today."

This content is created and maintained by a third party, and imported onto this page to help users provide their email addresses. You may be able to find more information about this and similar content at piano.io
Advertisement - Continue Reading Below
More From The Best Apps and Websites For... Everything
15 Apps to Play With Friends That Aren't Lame
The Best Workout Apps for Women Who Want Results
Advertisement - Continue Reading Below
Our Favorite Yoga Apps for Beginners
The 100 Best Shopping Sites to Browse Through
Shopping Apps More Addictive Than Reels
The Best Dating Apps for People Who Hate Them
Can't Find a Good Online Workout Class? We Gotchu
30+ Shopping Sites That Offer Free Shipping
How to Hang Out With Friends During Quarantine
The Best Group Video Chat Apps