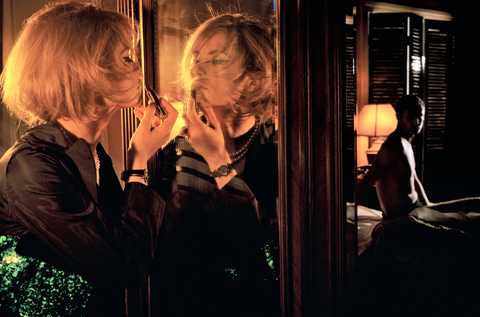 I arrived in the quaint little hotel in Florence, Italy, fresh off of three trains, a plane, and a taxi—which is to say, not very fresh at all. I was wearing leggings with an oversize gray T-shirt that read yaaaassss!!! down the front, and had my 50-gallon backpacker's pack strapped around my waist and chest. Let's not even talk about my hair.

It didn't matter, though, as I walked into the room that David* had gotten us for the weekend. "It's not the Ritz," he had warned me via text, "but it's got character." He was right—the bathtub had feet (my favorite), the wallpaper was almost not creepy, and the big mirror with the heavy golden frame hung directly in front of the king-size bed that was actually two twins strapped together. But I barely had time to look around before he smiled, unhooked my backpack, and scooped me into a kiss. "You look beautiful."

"Bullshit," I retorted, laughing and pushing him off before he scooped me up again, "but this room is perfect."

Once the mandatory cuteness and "How was your flight?" (that he had paid for, of course) was over, he asked me how much my cab cost. "20 euros," I told him as he reached for his wallet. He handed me 2,000.

I'm used to getting cab money from David—it's been nearly two years that we've been seeing each other. He never lets me leave a date without making sure I'm safely taken care of in a yellow cab, because he's a gentleman, and I never let him see me jump out 10 blocks later to take the subway so that I can get a pedicure with the cash instead, because I'm a lady. Even though David's net worth is in the millions, when we first started seeing each other, I felt weird about taking cab fare for a ride home—which is especially weird considering the way we met: seekingarrangement.com.

I first heard about the site, which pairs sugar daddies (and mommas) with sugar babies, three years ago. I was 25 and struggling to find freelance work after two entry-level media jobs in New York City had abused my time, sapped my creative energy, and—perhaps most important—neglected my bank account. And I felt equally beat up in my love life, with a long-distance, in-the-midst-of-law-school boyfriend who declared himself too busy for a commitment while simultaneously dating me and another woman. The idea of a truly transparent relationship that lacked emotional commitment sounded like a welcome relief, a rebound at its finest.

"The idea of a truly transparent relationship that lacked emotional commitment sounded like a welcome relief, a rebound at its finest."

I knew the site was used to set up "mutually beneficial" relationships, as its tagline states, but it became immediately clear that it wasn't an escort service. Most of the sponsors (as daddies and mommas are called) seemed to want more than a sexual encounter ("I'm looking for a real, ongoing connection," is a phrase that appeared repeatedly). So I cautiously created a profile, choosing a photo of myself stand-up paddleboarding in a bikini. It was far enough away to obscure my face but also showed that I took care of myself. In the box that asked what I was looking for, I wrote: "Negotiable."

The first date I set up through the site was a bust. The guy was rude and had Jimmy Neutron hair that added three inches to his miniature frame. I met the next man at the Plaza, where I felt like I'd had a nice conversation with my grandpa, given that this guy was at least 10 years older than his stated age. Number three took me to a speakeasy, which was wonderful until he ruined it by telling me the disgusting things he would do to me in a nearby hotel where he assumed I'd meet him shortly. (For the record, sex isn't a given—just as it wouldn't be for a Tinder meet-up. And I've learned from fellow sugar babies that some relationships never get sexual, instead ending up like mentorships or familial pairings.)

But even though I had been dating duds, it occurred to me that most sponsors on the site had their shit together. Almost all of the people I met were successful in their own right—CEOs, real-estate moguls, bankers, lawyers. Many were self-made millionaires: smart, busy people I could learn from. I needed to take advantage of the access.

Since my release from the media world, I had started a writing business, and my double major in art history and English left me ill-prepared to deal with the noncreative aspects of running my own company. If I couldn't find someone I liked to lavish me with cash or gifts, maybe I could use the site to meet these moguls, tap their brains, and learn to build my own business so I could eventually treat myself. With that in mind, I added a new line to the What I'm Looking For section of my profile: "Business acumen and a willingness to teach is a plus."

That's when I met David. Tall and broad, he's in his 40s and the only sign of age on his face are smile lines around his eyes. He's a busy venture capitalist, and we happened to meet the night that my business was hit with some major press. Barely knowing me, he swooped in and helped me figure out how to streamline my operation to keep track of new customers—and he's continued to swoop in when I've had questions ever since.

Sugar baby lore would have you believe that whipping out a checkbook is how David helps me through professional ups and downs—and that I eagerly take his money—but I've never let him invest in my company. Instead, he's been there to field questions, celebrate my accomplishments, and share in my successes and failures each step of the way. And his generosity (he's offered me money to pay rent and bills, though I've yet to take him up on it) is like a constant safety net, giving me the courage and mental energy to focus on building my business. When David says he's proud of what I've built, I can tell he's also proud that he helped me do it.

"He swooped in and helped me figure out how to streamline my operation to keep track of new customers—and he's continued to swoop in when I've had questions ever since."

Of course, there are other reasons I like being with him. Our first kiss, on date number two, gave me the legs-like-Jell-O feeling. Still, we waited another three dates to get intimate. I think the premise of meeting on the site made us both want to wait to get it right—to make sure we genuinely had a connection before being distracted by extravagant evenings together and (what turned out to be) fantastic sex.

These days, we see each other once or twice a month and communicate slightly more often. We're not exclusive, but there's no jealousy or resentment: We both get to maintain our independence with the knowledge that someone has our back—and that a great date and warm body is a text away.

And I know what you're thinking: Yes, this is the man who flew me to Florence and handed me more cash than I'd ever seen. And, yes, he's taken me on a shopping spree or two and gifted me the occasional antique. But he's also introduced me to lawyers and accountants, read through contracts that look like gibberish, and advised me on my next career steps. And I'm not ashamed to be on the receiving end of that.

Eventually, I want to settle down with someone closer to my own age who has the time and energy to see me on a regular basis. I even have an OkCupid date coming up this week, where we'll probably go dutch on a couple rounds of beer. But for now, I'm content. I'm in a relationship with David where we both give what we can afford—and if he's taught me anything about business, it's that what we have is pretty much the definition of a well-negotiated deal.