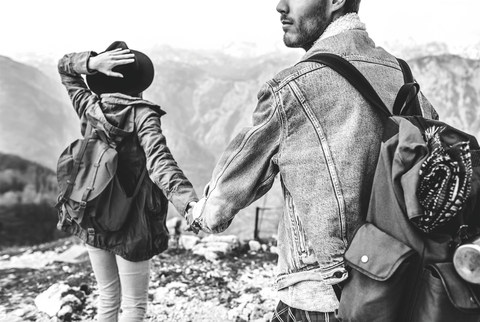 It started with a tremor. I was half-awake, half-naked, and brushing my teeth when the floor suddenly shook, as if all the angry women in the world had stamped their feet at once. "Was that an earthquake?" I whispered, squinting at myself in the mirror. The white tiles beneath me seemed to sway. "Earthquake!" I shouted, spewing toothpaste down my chin. My sleeping husband, Gadi, didn't move. I shook him. "Get up! Earthquake!" He bolted upright as I ran to scoop our 4-year-old daughter out of her bed. When we got back to the bedroom, he looked panicked. "Gadi, what do we do?" I yelled. Our framed wedding photo rattled against the wall. "Get under a table? Stand in the doorway?"

Maybe crouch? Maybe crouch! It's been almost two years since that morning, and obviously, those weren't his last words. The shaking stopped within a few seconds. Turns out, it was only a minor earthquake on a fault line near Los Angeles, where I've lived for almost 20 years. And even though my husband of 10 years and I sheepishly laughed about our helplessness and clinked a couple shots of tequila to our survival that night, a sneaky chasm opened between us. "I guess we're not ready for the big one," I remember saying to him. But, secretly, I was thinking, Why didn't I choose a man who can protect me?

"Sure, he can finish the Sunday New York Times crossword puzzle, but who needs a four-letter word for a soothing succulent—aloe!—when a zombie is gnawing on our daughter's ankle?"

It's a legitimate—albeit embarrassingly sexist—concern. Scientists recently predicted a 99.7 percent chance that a magnitude 6.7 earthquake will rock California in the next 30 years. And it's not just a natural disaster that terrifies me: According to end-timers, the apocalypse is already afoot. (If President Trump has his way, no doubt it will be televised.) And I can only imagine what will happen if my state secedes from the nation—a distinct possibility considering the #Calexit campaign currently underway. As Ilana from Broad City put it on the show's Inauguration Day mini-episode, "It is about to get I Am Legend up in here."

And when it does, my family is doomed. I didn't marry the rugged type. My husband may kill houseflies with his bare hands, but his salt-and-pepper chin stubble is decorative, and he has never once slept outdoors. When the typically balmy temperature in Los Angeles drops below 55 degrees, he shivers like a Chihuahua. Sure, he can finish the Sunday New York Times crossword puzzle and make me laugh so hard that my ovaries ache, but who needs a four-letter word for a soothing succulent—aloe!—when a zombie is gnawing on our daughter's ankle? And it's not as if I would fare any better in a catastrophe; I half-assemble toys for my kid and have been known to fake injuries in order to leave brutal barre classes early.

So when I hear about REI Outdoor School's survival course for couples at a state park nearby in Malibu, I decide to sign us up. "Relationships are hard to survive, but we're here to help," reads the online description. "We will provide practical wilderness survival tips and strategies that everyone in a loving relationship should know." Cost to prep for the cataclysm: $190.

On the windy, sun-drenched morning of the course, we arrive at the park and find about 10 other couples milling around a municipal picnic table. A young, hipster duo in matching beanies and mirrored sunglasses takes selfies, while a cute, sporty-looking couple shares the straw of a CamelBak water pack. Most everyone wears weathered hiking boots and quick-dry clothing. Gadi and I debated buying the "required" rain-resistant shoes and pants for about two minutes and decided against it. I'm in decade-old Adidas sneakers; he's wearing Vans. When we all introduce ourselves and reveal why we're here, folks talk about becoming better campers or learning compass navigation.

My turn: "We've never camped. We probably never will," I say. "But whatever happens, whether it's a big earthquake or full-on Armageddon, we don't want to die."

"Or kill each other," adds Gadi, which gets a few laughs.

"It suddenly occurs to me that my husband and I don't team up often—and consequently, we rarely cheer each other on."

After that, things get primal fast. Our first task is to make fire. The two instructors—middle-aged guys with gray ponytails, wearing cargo shorts with literally dozens of pockets—show us how to assemble little Jenga-like towers of sticks with dried pine needles, and give us all a handy tool called a magnesium fire striker to spark a flame. At first, I channel Ma Ingalls from Little House on the Prairie and step aside to let Gadi struggle with the flint. The couples near us aren't making better progress. We all seem to have decided that Boy Scouts build fires and Girl Scouts sell cookies, so it's mostly the men who are trying, and I sense collective frustration tinged with dude shame when they fail. Screw this, I think.

"Let me ..." I say, gently putting my hand on Gadi's arm. "I got it," he says through clenched teeth, just as the nest of pine needles ignites. I'm impressed. We lean in to blow on the tiny flicker together and high-five when our flame doubles in size. It suddenly occurs to me that my husband and I don't team up often—and consequently, we rarely cheer each other on. After the tremors two years ago, for example, I huffily ordered earthquake kits and a hand-crank radio/flashlight from Amazon, and then acted all smug when they arrived. Now it occurs to me that we probably should have sat down together to discuss a disaster emergency plan and plot an evacuation route. 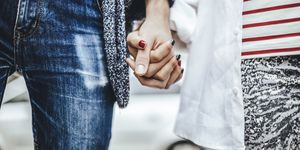 10 Things People in Healthy Relationships Do 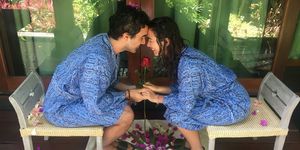 My Boyfriend and I Got Blessed

Over the next three hours, we learn to tie trusty bowline knots, create drinkable condensation with a plastic bag tied to a tree, and save one of our instructors from hypothetical hypothermia. Really, these are not the skills our family needs in an urban collapse. Metaphorically, though, they apply to any relationship. The bowline knot, a simple and elegant configuration, never slips or comes loose under any strain or load. It just hangs tough and does its job. Need I say more? Collecting droplets of water calls for freakishly infinite patience, and even when you're done, you don't get much more than a cup to drink. Lesson: Manage expectations. And if one of us were to fall through a frozen lake and lose feeling in his or her legs, well, the instructor was adamant on one point: "Everyone in the group needs to know what to do in a crisis, because you never know who's going to get hurt."

By the end of the daylong course, I've already forgotten whether we are supposed to play dead or jump up and down and scream if we run into a black bear, but, really, who cares? We live in freaking Hollywood. I do, however, come away with newfound respect for my husband and a more modern take on the roles we play in our relationship.

Why would I jet off to Washington, D.C., to march for equal rights with a million women and then come home and expect my man to fend off the zombies? We're in this together, and we need to start acting like it. When the big one comes, we've learned that we should drop to our knees and protect our heads and necks from falling debris. But if it gets all scorched earth and the end is inevitable, we'll probably just crouch together.

This article appears in the June 2017 issue of Marie Claire, on newsstands now.