Our guy expert, Lodro Rinzler, reached out to men across the country to ask what they were worried about when looking at your online dating profile. Here's what guys think women might lie about online:

The number one thing the guys polled think a woman might lie about on her online dating profile is her looks. I am using "looks" as an umbrella term here that covers everything from your height to your weight to your body type to you using a photo of yourself from five years ago. Also, please note that a picture of just your face tells us that you either don't have a nice body or you don't like the body you have. Be confident enough to show your full form.

"I've definitely gone out with women who say they're 25 but are actually 29," said Eddie. Sometimes a woman may change her age to initially attract a man, but it's such a silly lie to chose; was Eddie's date going to pretend to be four years younger for the rest of their relationship? Since so many men have had this experience, don't be surprised if a guys casually glances at your drivers license when the bouncer asks for it at the door.

That You LOVE to Travel

Many women will put that they "LOVE to travel" even if they haven't gone on any real trips or vacations in three years. I don't recommend saying this on your profile because a) everyone says it so you don't stand out from the crowd at all and b) even if you do love to travel, if you haven't lately it might get real awkward real quick when he starts grilling you about all your recent vacations.

The Amount of Time You Spend at the Gym

One of the gentlemen I reached out to, Dave, told me, "I think women will exaggerate the amount or frequency of exercise they do." A woman may want to show off how important it is to her that she takes good care of her body, but if you list that you go to the gym every single day a guy may think you're exaggerating.

That Impressive Book/TV Show/Movie You Mentioned

One person I reached out to, Sam, said, "I think women will leave off interests that might be considered too girly or immature—any kind of guilty pleasure TV show or magazine, etc. and try to list more intellectual things like books they've read, even if said book was required in high school ten years ago." If you love Portrait of an Artist as a Young Man, put it on the profile, but don't be surprised if your date expects you to actually remember it in detail.

Your Level of Independence

Lots of pictures with you and the girls is nice, but when a woman keeps posting about being fiercely independent and not at all clingy on her dating profile a fella might raise an eyebrow and grow suspicious. It's a bit like saying "don't think of a pink elephant." Why bring it up if you don't want a guy's mind to go straight there?

How Easy Going You Are

Similarly, when a woman says how she is a laid back, easy going, go-with-the-flow sort of person a man may begin to question if, in reality, she is actually very sensitive/easy to trigger. Best to leave those qualities out of your profile and show, don't tell.

Your Interest in Sports

How Successful You Are

"I think some women want to project high aspirations even if they aren't successful right now," said Eric. Men are guilty of many of these ten things too, but perhaps I'd say men more often inflate their job title or position. We may be suspicious of how successful you say you are because we lied on our own profile about this one!

What You're Looking for Romantically

If you say you're looking for something casual a guy may not take that at face value. Many of us (us being all genders) have had that casual hook-up buddy that after a few months all of a sudden wanted more. Sometimes you may think you want one thing (to be casual) and end up wanting something else (a real relationship). There's nothing wrong with that, unless you're purposefully trying to trick someone. If a guy has had that experience, he's likely to be wary of you stating that you just want to be friends-with-benefits.

At the end of the day, both genders tend to stretch the truth on the items above, but they also tend to be part of the most generic profiles. If you want to stand out from the rest, talk about the things you love to do now, like eat brunch or binge-watch Netflix, so you'll attract someone you're compatible with.


Lazy Girl's Guide to Getting a Boyfriend


A Novice's Guide to Online Dating


7 Rules For Setting Up An Online Dating Profile 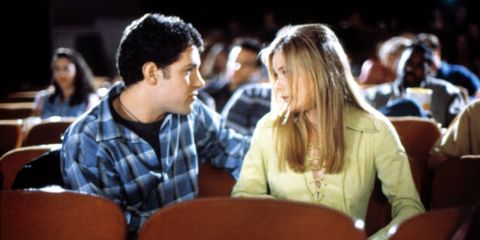