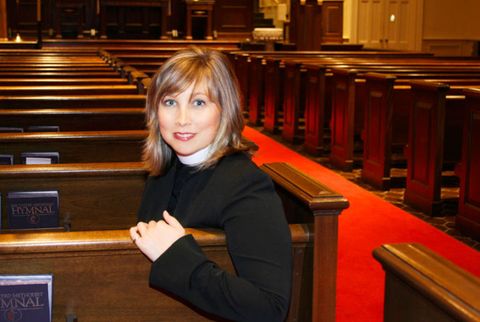 At the end of the night, my date and I sat in the darkness of his car, flirting. He was cute, with thoughtful eyes and a full mouth. As he leaned in, eyes closed, lips parted, I moved closer, but just as I felt the warmth of his face, he jerked away.

"What if people see us?" he asked with a slight look of panic.

By night, I look like an average 27-year-old woman with my fitted jeans, hobo handbag, and sweeping blonde hair; but by day, I am a full-time pastor of a 3,000-member congregation. This means that nearly every Sunday, at the First United Methodist Church in Huntsville, Alabama, you'll find me mounting the pulpit in a collar and cassock, my black ankle-length robe.

With that not-so-sexy image un-doubtedly in mind, my date backed off. We never did kiss that night. And soon after, he stopped calling.

I love my career, but it has plagued my love life since I decided to pursue ministry during my senior year of college. Back then, I was engaged, but my fiancé didn't agree with the notion of women leading the church, so I broke up with him and packed for seminary.

To complicate matters more, even though I've had sex in the past, I vowed to abstain from sex before marriage. Since I'm so committed to my career, this decision isn't that difficult for me. But it's a detail that makes guys wary about groping a woman of the cloth, and most simply bolt. That's why I hide my profession early in a relationship. "Oh, I work in communications for a nonprofit. But tell me about you," I say. If my date presses me, I fess up, "I'm a pastor at a church." Most guys seem disappointed, and some question my sexual boundaries — are you saving yourself until marriage? Does oral sex count? (Yes and yes.) But while I'm game for hooking up, I can't have sex now, and for guys, that's often a deal-breaker.

To temper my libido, I ended up ditching my Twilight books and turning to Krispy Kreme doughnuts. My body was overproducing insulin (another aspect of polycystic ovarian disease), which made me feel perpetually famished. And although the doughnuts provided a brief distraction from my sexual cravings, I gained 15 pounds. Finally, I got on medication, and it helped me manage my sex drive. My waistline is thanking me, too. Now, when I feel normal sexual urges, I deal with it by going for a run.

Guys are surprised to encounter a female pastor — but they don't know that over the past century, women have been ordained across many religions. And according to the Bureau of Labor Statistics, from 1994 to 2009, the number of women clergy in the U.S. doubled to 73,000.

Some men do like the collar — but I wouldn't date them. These ultraconservative guys are quick to condemn the female ministry but always ask if I'm willing to marry and stay at home with the kids. I have a master's degree from Yale. I'm a community leader. Why would I give all of that up?

Sometimes older people try to set me up. One congregant pitched her bachelor son, a drug addict who recently served time for dealing meth. He sounded like a catch.

At the end of the day, I'm just a normal 20-something who watches Glee and loves photography. And I'm starting to relax about dating. For so long I've viewed my career as a hindrance, but really, it is a fast, fabulous filter to weed out the jerks. On a recent date, I was honest about my job. And the guy was cool about it. Huge turn-on.

That date reminded me that good guys are out there and worth waiting for. After all, I was brave enough to end an engagement to pursue the career I love. I can hold out for someone — of any religion — strong enough to love all of me, both the pastor and the woman.