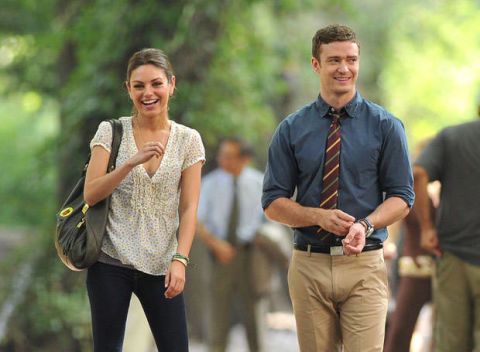 In any relationship there is always one person who wants to spend more time with the other. Even in the most loving partnerships there's the one person who texts more, who wants more quiet nights at home together, who more often picks up thoughtful gifts, and one person who could really just use a night out with friends. In strong relationships those scales are more closely balanced, and sway one way or another in a given week so it's not as perceptible. For looser relationships it's often pretty obvious.

When it comes to hooking up with someone regularly, one person is often more into it than the other. One person may have just started hooking up because it was fun and it turned into a hardcore crush. The other might be hooking up with multiple people and is already on the fence about what you're doing. Whatever the circumstances, the balance of affection, and thus power, becomes a little uneven.

If you are trying to turn your friends-with-benefits situation into something more you really ought to look at where you fall in this dynamic. Is he flexting (flirt-texting) all day or just hitting you up post 11:00 PM? Do you always instigate your meet-ups or is it 50/50? Most importantly: has he given you any indication that he wants to move things beyond the bedroom?

1. He introduced you to a number of his friends (one doesn't count)

2. He stopped talking about his ex a while ago

3. You had brunch and/or watched morning TV instead of one of you just rolling out of bed and leaving

4. He has made it extremely clear he's not seeing other people

5. He's mentioned you in the future tense of "if you were my girlfriend..."

If you haven't received any of those sorts of signs from him, you may be farther from the gf/bf status than you would like. I hate (hate) to talk power dynamics in relationships, because more often than not the best thing to do when someone isn't as into you as you are into them is to just walk away. However, I will say this: absence makes the heart grow fonder. In other words, stop texting him. Don't call. If you are getting mixed signals from him, just walk away a little bit and watch when he starts hitting you up earlier and more frequently than before.

My friend Scott, for example, hooked up with a girl a few times. He was being pretty macho about it, leading her on while flirting with other girls to see if someone more interesting fell into his lap. One night he hit this lady up around midnight but didn't get a reply. He assumed he would wake up to see something from her. Nothing. He started to wonder what was up until finally mid-afternoon he got that response: "Whoops sorry. Had a late night, slept in." Scott called me up paranoid: "Think she hooked up with someone else?" Maybe she did, maybe she ignored his text and was sitting on her couch watching a movie. In either case, Scott began to pursue her in earnest, not wanting to lose her to another man. Today they're in a committed relationship.

It's a little bit like buying a car: you know what you want and the dealer is being a bit wishy-washy. However, the dealer is interested in selling the car, so when you fake walk away all of a sudden new compromises are on the table. I'm not saying this is the most genuine move - more genuine would be being up front about what you want and seeing if he is on the same page - but the pull away is effective.

Obviously, communication is key, but if you get the sense that he's not as into you though, a little space goes a long way.