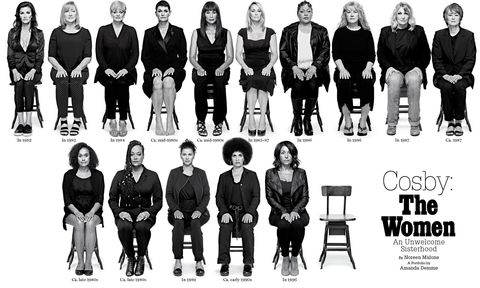 The cover story of New York magazine this week is a chillingly powerful portrait of 35 women who have all accused Bill Cosby of sexual assault. It's a lot to take in—which is exactly the point—and it's been widely discussed in recent days.

But now a new narrative is evolving.

On the cover, after rows of women sitting in chairs, there's one empty chair. It was meant to represent the 11 other known accusers who chose not to participate in the story, but whose experiences are no less valid and still need to be considered.

That chair has now taken on a life of its own. Under the hashtag #TheEmptyChair, thousands of people are speaking out about how many victims of sexual assault feel voiceless, powerless, and unable to come forward. (A gut punch: According to the Rape, Abuse, and Incest National Network, there are about 293,000 sexual assaults a year—and an eye-watering 68% of them go unreported.)

Journalist Elon James White, who publishes This Week in Blackness, was the first to use #TheEmptyChair hashtag, and ended up receiving hundreds of direct messages, emails, and Facebook messages from anonymous women who felt compelled to share their stories of sexual assault. He started sharing those stories on Twitter on Sunday, and he hasn't stopped yet.

The concept is similar to the blog I Believe You | It's Not Your Fault, which posts submitted stories about sexual assault and gives advice to survivors. But with Cosby in the news, it's more important than ever to show how much of a problem rape culture really is.

Powerfully, people have used #TheEmptyChair to give messages of support and love to victims everywhere.

If you are in the #TheEmptyChair - you are not alone, you are not defined by what happened to you. I believe you. I hear you. I stand w/ you

Do not wait for a man to speak to believe women who are already talking. Nothing to add. #TheEmptyChair