An enormous potentially active volcano in Northern California surrounded by a vast expanse of forests and lakes, Mount Shasta has become popular among outdoor sports enthusiasts as well as new-age believers who see it as a sacred place packed with spiritual energy. Singer/songwriter Jessie Reyez recently happened upon it with some friends and fell in love. Here’s why it captivated her, and what she did while she was there:

Reyez, whose new EP, Being Human in Public is available now.
Getty Images

“It was June, during my first headline tour. Me and the crew—like eight of us—were all in this little van driving from San Francisco to Portland when I looked out the window and saw this beautiful mountain surrounded by green lakes. There wasn’t a cloud in the sky and the water was glistening like a million tiny emeralds. We immediately drove toward it and found a little spot to park; we made our way through some trees and came out at the edge of the lake, then took our tops off and just jumped in. I remember swimming out to the middle of the lake and floating there—arms out, legs out. The moon and the sun were up at the same time and one lone bird flew across the sky. It was such a serene moment. I feel like God was there.

We spent hours at the water, and when we drove away at sunset it just looked so beautiful that we stopped and I climbed out onto the trailer behind our van and danced on it with the pink-yellow sky and ice-tipped mountain in the background. Then, five minutes down the road we found this wicked spot called Yaks. We got sandwiches, burgers, deluxe-ass tater tots, and some good beers. Tons of beer.

This year, we’re on tour again and hopefully we’ll be able to just pack up, get back to Mount Shasta, and stay the night. I can’t wait.”

Of the recent wildfires in the area, Reyez adds, “the energy there feels pure. It’s a shame that fire ripped through such a beautiful place and I hope the people effected can rebuild what they’ve lost.”

If we've convinced you to check out Mount Shasta yourself, here are our picks for making the most of your time there:

Stay in a vintage airstream with courtesy of Outdoorsy.
Courtesy

Those who prefer a more nomadic experience can rent a camper from Outdoorsy, “the Airbnb of RVs,” which has pickup locations throughout California.

The McCloud River Mercantile Hotel, a former 19th century lumber mill store, is just about 15 minutes from Mount Shasta and offers views of the peak.

If Jessie’s meal sounds ideal, make your way to Yaks on the 5, a locally famous burger joint.

For those seeking more upscale dining, check out Lily's, a pan-Asian/American spot in a cottage setting.

For a refreshing dip, you can always make like Jessie and jump into any of the local lakes and rivers, but you’ll find a developed swimming beach at Lake Siskiyou campground and Lake Shastina.

Shasta-Trinity National Forest is full of hiking trails. One of the most popular is the McCloud River Falls Trail, which has views of three different waterfalls.

If you’re into all things new-age, Soul Connections is your one-stop-shop metaphysical supplies store.

For the nature enthusiasts, Shasta Base Camp sells and rents outdoor gear (and has an attached rock wall climbing gym). 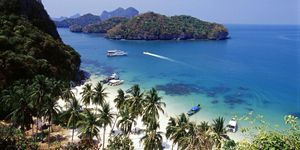