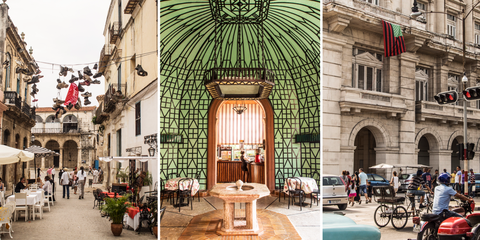 My choice super power has always been time travel—and while that will always remain a pipe dream (at least in my lifetime), earlier this summer, 90 miles off the coast of Miami, I got as close as I'd ever get. In Cuba's Old Havana, surrounded by rich colonial architecture and old classic cars, I had been transported to a different time—well, when I wasn't sneaking off to one of the few and far between hotels for 6-CUCs-an-hour WiFi.

As a nostalgia-chasing millennial, when President Obama reinstated diplomatic relations with frozen-in-time Cuba late last year—and traveling there was possible for the first time since 1959—it catapulted to the top of my near-future bucket list. After my ticket was booked and I shared with others that I'd be going to Cuba, it was evident that my eagerness to explore the once-off-limits country was unanimous. Everyone had a genuine curiosity I hadn't experienced before or even thought possible in an age wrought with Instagram wanderlust.

It occurred to me that I'd not only be amidst the early group of American travelers going to Cuba—as of right now there are only a dozen categories of travel that are granted tourist licenses including family visits, humanitarian efforts, professional research, educational programs, and journalism—but I would be experiencing it on the brink of change, for better or for worse. Perhaps it's the Caribbean Hotel & Tourism Association who puts this sentiment best: "The biggest and most disruptive pebble to be dropped into the Caribbean pool in 50 years will arrive with the opening of travel to Cuba for United States citizens." So, yes, I felt a slight feeling of trepidation.

Considering my time in Cuba, specifically Havana, would just be a couple of days, I was happy to be traveling with an authorized tour company, Altruvistas, as I learned quickly, it's *all* about who you know. But just as importantly, our people-to-people itinerary was crafted with a heritage-rich, socio-economic consciousness, customized to what we wanted to experience. For example, many of the stops on our itinerary were businesses owned by women and it was incredible to learn that female entrepreneurs or "cuentapropistas" are on the rise in Cuba.

Similarly, I found that there was no better way to get an authentic experience on a conservative budget than by forgoing a hotel for one of Havana's prominent Casas Particulares, which are private bed and breakfasts owned by the state. Only growing in number, in April, Airbnb added Cuba to its long list of destinations with more than 1,000 listings, an invaluable boon to American tourism, as the current hotel infrastructure simply cannot meet the demand. My home for a three-night stay was Casa Densil, a newly restored colonial apartment owned by an elegant older Italian gentleman named Ezio.

Nestled in a residential area of Old Havana, just a few blocks away from the Malecón waterfront, it stood out on the street from the outside, but was even more spectacular on the inside with high ceilings, polished molding, crystal chandeliers, and vintage furniture. My $40-a-night room (the average room price in Havana is $41, according to Airbnb) was fully furnished with a private bathroom. Plus, it had air conditioning and running hot/cold water—both precious commodities in Cuba. Densil also had a breezy rooftop terrace complete with a white curtain-clad cabana bed that had sweeping views of the city and sea.

My bedroom in Casa Densil
Courtesy of Airbnb

It was a true gem—and it's no wonder that on the first day Airbnb launched in Cuba, Casa Densil already had 129 inquires from prospective guests. And while that speaks to its aesthetic appeal, what I loved most was getting to spend time with my host Ezio, who was truly lovely, whether he was hosting an old-fashioned nightcap for guests in the living room at the end of the evening or waxing poetic about professional basketball (during my visit, he snuck off to a nearby hotel to watch the NBA playoffs). And this was just the beginning of getting to know the people-to-people synergy.

Our initial walking tour of Old Havana was lead by a local Cuban architect, who took us through the four principle plazas. The multicolored, centuries-old buildings boasted a medley of different architecture styles including baroque, neoclassical, and colonial.

All of the structures were in different stages of restoration, from dilapidated to returned to their former glory. As our guide explained, the city is currently undergoing massive efforts to salvage neglected buildings, attract tourism, and improve social services for local residents.

While walking around Central and Old Havana is always a marvel, it was a particularly exciting time as our visit coincided with the Havana Biennial, with art exhibitions peppered through the city. During our trip, we visited the studios of Biennial artist Francisco Gordillo and one of Cuba's foremost artists in the post-revolutionary generation, Choco. Far from an art expert myself, it was still apparent to me how, despite lack of supplies and an expansive international market, these artists were thriving creatively. But considering their surroundings, still relatively untouched by a capitalist society, it really shouldn't have been a surprise at all.

When it came to spending money—I swapped out American cash for CUCs (convertible pesos) at the airport upon arrival as Cuba is credit card free—Havana was extremely affordable, even for a twenty-something pinching pennies. But more importantly, as a patron, it felt like every CUC spent was making a difference, whether it was gratuity for an individual or shopping the local artisinal markets for handmade clothing and leather goods. But some of the best money spent was no doubt at the paladars, which are privately-owned restaurants and often family-run.

A more bona fide alternative to touristy, government-owned eateries, each paladar had its own flavor, from the decor to the cuisine. Not to mention, we were greeted with fresh, tangy mojitos upon arrival at each one. One highlight included my first meal, the first of my many lobster dishes, at the Paladar Moneda in Old Havana. Dining al fresco on an outdoor roof patio, I enjoyed the very same view of the Havana Harbor and 16th-century double fortress Morro-Cabaña that Jay Z and Beyoncé did on their highly-publicized Cuban jaunt (the locals are still talking about it). And on my final night in Cuba, our group took classic cars about a half an hour outside of the city to a no-frills, farm-to-fork paladar that served a variety of Cuban delicacies campesino-style with a live, three-piece band. But if there was one touristy hotspot that I had no qualms about loving, it was the storied cocktail bar and Ernest Hemingway hangout El Floridita, home to world-famous daiquiris that lived up to their reputation. (I did the leg work).

One morning in Miramar, a residential district of Havana that hosted some of the city's most glamorous homes in the '50s prior the revolution, we met architect and urban planner Miguel Coyula at the Casa de Tejas Verdes (Translation: House of Green Tiles), which is home to many an urban legend for those that love some good ol' tittle-tattle. Coyula lectured us, in very compelling fashion, on Havana's history, as well as the current challenges Cubans face today. In essence, the slow-to-be-reformed economy, as well as lack of access to global markets, has made it so that the country cannot sustain growth, making American tourism dollars crucial to further advancements. On the other hand, because private enterprise is such an undertaking in Cuba, it's creating an even larger inequality gap between the poor and well-to-do classes. This said, the majority of the Cubans I spoke with had a cautious optimism about the forthcoming change.

Looking back on my short trip to Cuba, I'm not only nostalgic for the places I visited and the people I met, but also how I experienced my trip, which was relatively unplugged. Unlike other destinations in the Caribbean, our day-to-day American "essentials," things like wifi and cell service, are hardly a given. As I explored Havana without the safety blanket that is my iPhone, I was present in a way I hadn't been in a long time. If I had a question, I asked a local. If I got lost, I embraced it. If I didn't get the money shot for Instagram, I was reminded myself that it did, in fact, happen. And since then, it's dawned on me that the next time I go to Cuba next, it'll feel more like home—and maybe that's not a good thing.

Alejandro González
Lauren Valenti Associate Web Editor I’m the associate web editor at Marie Claire.
Advertisement - Continue Reading Below
More From Travel
Dreamy, Inspirational Photos of Tangier, Morocco
How to Pack for a Sporty Weekend in L.A.
Advertisement - Continue Reading Below
Travel In Style With a Chic, Versatile Carry-On
Mexico’s Best Under-the-Radar Destinations
32 Photos of Royals On Vacation Through the Years
Instead of a Honeymoon, Take a "Buddymoon"
An Instagram Travel Guide to Basque Country
The Ultimate Catskills Winter Getaway
Shop the New Away x Serena Williams Collection
I Helped Rescue a Puppy for the 2020 Puppy Bowl