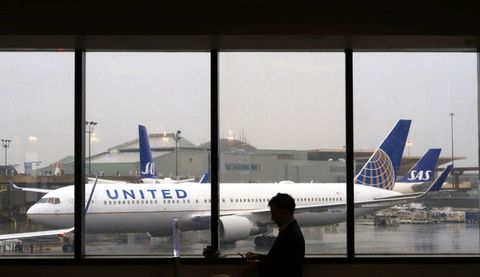 Last night, a United flight had to be evacuated after an engine fire broke at Newark Liberty International Airport.

United flight 1579 was on its way to San Francisco, CA when the airport's tower noticed what looked like flames coming from one of the plane's engines while it was taxiing on the runway, CNN reported.

A total of 124 passengers and seven crew members were on board when the fire broke out, CBS New York reported.

After the crew was notified of the fire, they deployed the chutes and evacuated the plane. Five people suffered minor injuries, according to this tweet from the airport.

Passenger Lo Toney posted a video from the tarmac to Twitter of emergency vehicles surrounding the plane with its slide chutes deployed.

Just had to evacuate my @united flight using the slide and everything @EWRairport pic.twitter.com/0YhAAPeoFF

"The pilot came on and said that it would take about 20 minutes as we were number 18 to take off," Toney told CNN. "Then about five to 10 minutes later we started to move and then the pilot came on the air and said 'Flight attendants prepare to evac'."

The airport was closed for nearly two hours last night but has since reopened with residual delays, according to CBS New York.

The Federal Aviation Administration is currently investigating how the engine fire started.

Lyndsey Matthews Freelance Writer Lyndsey Matthews is the Destination News Editor for AFAR; previously she was a Lifestyle Editor across all of Hearst Digital Media's brands, and a digital editor at Martha Stewart Weddings and Travel + Leisure.
This content is created and maintained by a third party, and imported onto this page to help users provide their email addresses. You may be able to find more information about this and similar content at piano.io
Advertisement - Continue Reading Below
More From Travel
Need a Vacay? Try One of These East Coast Beaches
Don't Go to the Beach Without These Essentials
Advertisement - Continue Reading Below
Where to Eat, Drink & Stay in Napa Valley
Three Travel Execs on Their Summer Vacay Plans
The Most Beautiful National Parks in the U.S.
8 Summer Vacation Spots That Are Calling Your Name
5 Wellness Vacations That Aren't Wellness Retreats
6 Fun Trips to Take With Your Best Friend
Created for From Marie Claire for Created by Marie Claire for
Chase Bank
The Most Gorgeous and Useful Luggage Sets
Celebrity Vacation Spots The Year You Were Born