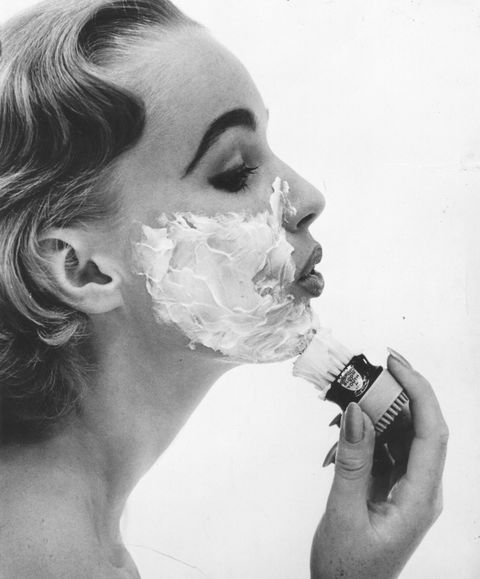 When I was a freshman in high school, a friend pointed out the thick, dark hair on my chin, cheeks, and upper lip.

She told me I should get rid of it and took me to a salon. There, a woman led me to a cramped room in the back that smelled of burnt plastic and lilac air freshener. "So much hair," the woman said as she applied warm wax strips to my face. She was perfectly made-up and her skin was unblemished—hairless. She smoothed the strips onto my face like they were bandages, and then ripped them briskly off, leaving a raw, stinging surface.

"I have shaved my face every day since the ninth grade."

I never waxed again. But I didn't want to bear the burning shame of a hairy face through the halls of high school, where I already felt like a nerdy outsider. So I picked up a razor.

I have shaved my face every day since the ninth grade.

When I first started shaving, I approached the whole thing with anxiety and shame. I locked the bathroom door, hoping no one would catch me. I lathered my face and shaved quickly to get it over with, but also carefully, since I wanted to make sure every trace of my beard disappeared under the blade of my razor. I was constantly terrified that someone would touch my face and be disgusted by stubble I might have missed.

But my perspective started to change when I was 21 and drove halfway across the country to attend LadyFest Midwest in Chicago, a feminist music festival that drew a heavily queer audience. Spilling out of the venues and into the streets were people of all appearances and genders: people who wore full faces of makeup and had hairy legs. There was JD Sampson, then of the band Le Tigre, who has always had a very androgynous appearance, which includes her now iconic mustache. I was amazed to see other bearded ladies like myself—except instead of ridding themselves of facial hair, they flaunted it.

As a queer person, I had already tried on a variety of gender expressions (short hair, long hair, makeup, no makeup, shaved head), but it still hadn't ever occurred to me that I could grow in my facial hair.

The experience stuck with me, but it wasn't until I was in my mid-20s and living in New York City that I decided I would actively grow out my beard. It was primarily a social experiment—but I also wanted to know what it would feel like.

By day three, I had a stubbly, noticeable five o'clock shadow. People stared, often on the subway. I don't know if women stared more than men, or if I just noticed their stares more. One particular woman's eyes lingered on me as I rode downtown. I could tell that since I looked relatively feminine, she was trying to figure out if the hair on my face was intentional or not. I could see it in her gaze: maybe I just didn't know better.

"I was amazed to see other bearded ladies like myself—except instead of ridding themselves of facial hair, they flaunted it."

During the week or so of letting my beard come in, I found myself procrastinating whenever I had to leave the apartment. While strangers staring didn't help, I began to see that, most of all, I just didn't feel like myself. I wanted to be able to go out into the world feeling like, well, me.

A part of me was disappointed I couldn't flaunt my facial hair like the women at the music festival. But after growing out my beard, I did start to feel less shame about shaving my face. When I returned to shaving, fully understanding the practice as a choice—not a societal mandate—it felt like a kind of radical act I could embrace: I was performing a masculine practice to appear feminine.

The author
Courtesy of Kat Savino

Now, I try to be open about shaving, and about having facial hair in general—even among women, it's not talked about as often as other body hair removal. Those of us who are bearded ladies stay closeted—I'm sure that many who have the money, in fact, often chose electrolysis so they can pretend they never had a beard to begin with.

But I wouldn't choose to permanently get rid of my facial hair even if money were no object. I'd rather go into the bathroom every morning, lather up, and proudly shave it off.

This content is created and maintained by a third party, and imported onto this page to help users provide their email addresses. You may be able to find more information about this and similar content at piano.io
Advertisement - Continue Reading Below
More From Beauty
The Foundation Brushes the Pros Are Obsessed With
Found: SPF Sprays That Make Sun Protection Easy
Advertisement - Continue Reading Below
Drew Barrymore Thinks Balance Is an Elusive Bitch
The Must-Have Products for Air-Drying Your Hair
5 Planet-Friendly Products To Try This Summer
Created for From Marie Claire for Created by Marie Claire for
Australian Gold
Setting Powders for Your Vaxxed Girl Summer
Yes, LED Face Masks Work, and Yes—You Need One
24 Hours with Kate Winslet
How to Get The '70s Hair That's All Over TikTok
Katharine McPhee’s Confidence-Boosting Rituals
Created for From Marie Claire for Created by Marie Claire for
European Wax Center