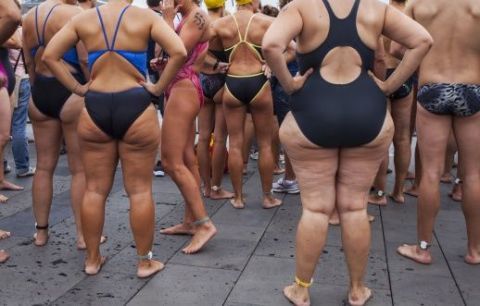 When I was younger, all I wanted was to be invisible.

Those of us who grow up as a target for cruelty understand the concept of "visibility" from an extraordinarily early age, even if we don't have the context or vocabulary for it. And since childhood, my body disqualified me from ever existing without intense scrutiny. What's a slowly expanding pre-teen to do?

"my body disqualified me from ever existing without intense scrutiny."

I did my best to try to get people to pay attention to something else or at least not pay attention to me. But short of shouting "LOOK OVER THERE! A T-REX!" on the playground and running as fast as I could in the opposite direction, there didn't feel like there was a whole lot I could do.

So, I shrunk myself. I wore baggy, oversized clothing to hide my body. I wore my hair long and hid behind it. I didn't care about being a girl—the idea of a "girl" was so far away from me, something effortless and light and gentle and svelte, creatures made of cotton candy and air. So I backpedaled in the opposite direction in a flailing attempt to hide.

What I learned from trying to be invisible was primarily that it was impossible. But I tried. I ate particular things in public and other things at home. I tried to not be fat—I tried not to be fat in incredibly dangerous and unhealthy ways. It didn't really work.

By high school, I thought, what if I put in the effort? What if I wore colors that were not black, makeup that was not slapdash? What if I got bangs?

And by god, it made it easier.

I could affect how others responded to my body by over-performing femininity (a growing understanding of feminism and intersectionality certainly helps). Makeup, carefully styled hair, skirts and blouses and colors became my uniform. I did, in fact, get bangs. They looked okay. They showed that I was trying.

I was rewarded, sort of, by not having my food and body commented on by random strangers—as much.

This is a dubious reward at best, to be (mostly) left the hell alone. Maybe it was just the result of growing up and no longer believing or being surrounded by people who believe that Orlando Bloom's time as Will Turner was the pinnacle of cultural achievement.

But now in my mid-20s, I've found random strangers will still comment on my food and my body and my health and whether or not I am personally costing the country millions of dollars in diabetes and heart disease insurance payouts.

"knowing, the whole time, that 'regular' is a lie, that even my thinner friends could never have neutral bodies because we are all women, and being a woman is not neutral."

They do this more when I'm wearing yoga pants and a ratty sweatshirt and less when wearing a skirt and lipstick. And so I've come to accommodate them: Even when I don't feel like wearing a dress, I also don't want to be told I'm disgusting in the street—so I concede, and put on the dress.

I have had to try so, so hard just to achieve neutrality in my everyday life—much harder than anyone with a thin body. I have to be Fat Barbie, if you will, in order to just to be seen as "regular"—knowing, the whole time, that regular is a lie, that even my thinner friends could never have neutral bodies because we are all women, and being a woman is not neutral.

Sometimes I just want to lay in my bed and wonder what it must be like to wake up every day—not just some days or half of my days or in some contexts or among certain people—without the anxiety that accompanies being a woman, being a fat woman, being a fat queer woman. As much as we profess that we can get rid of it, that we should just not care and live our lives and be happy and free and dance in a field of sunflowers, the reality is that we are targeted.

I grapple with femininity—how it's both served me and not—even now. Somewhere along the line, I figured that if I'm going to be forced into a certain kind of visibility, if I'm going to be under a certain kind of scrutiny without my consent, then I will definitely give you something to look at. This brings us to Phase 3 of my evolution: I chopped my hair off and dyed it bright pink. I started wearing floral crop tops and tulle skirts and massive leather boots. I just...went there.

Oddly, I feel freer by consciously taking up more space. I am the exact opposite of my teenage self.

Sometimes it seems like my entire adolescence was a series of outfits I tried on as versions of who I was trying to be, and now I've finally accepted the one that fits.

I'm 25 and I am miles and miles away from who I was at 15 but I carry her with me, and I love her, and because I love her I lean way the fuck into being visible. Literally visible. I've appeared in multiple videos for my job and had a very short-lived web series, plastering pictures of myself all over my blog and my website and my Twitter.

Being fat, I hope that my happiness, my bright pink hair, and my body are a double middle finger to the idea that there is only a certain kind of femininity that is acceptable. I—fat, female, queer—want to be one of many types of existence that is okay. That, hell, we can be proud of.

Now, finally, I want to be seen, in all my glory.

This content is created and maintained by a third party, and imported onto this page to help users provide their email addresses. You may be able to find more information about this and similar content at piano.io
Advertisement - Continue Reading Below
More From Beauty
Dazzling Makeup Looks From the Spring Runways
Michelle Obama's MUA Talks Her Inauguration Look
Advertisement - Continue Reading Below
24 Hours With Nail Artist Naomi Yasuda
You Need This Kamala Harris-Inspired Lipstick
Acne Scars Are No Match For These Cult Products
Lengthening Mascaras for Your Longest Lashes Ever
Why Resoré's Body Towel Is Worth It
The Best Supplements for Glowing Skin
Hair Dryer Brushes Will Change Your Blowout Game
A Dermatologist's Guide to Ferulic Acid