Today's Top Stories
1
What Liberation Means This Juneteenth
2
Kathryn Garcia: It's Time to Step Up or Shut Up
3
Listen to the Best New Love Songs of 2021 (So Far)
4
The Black-Owned Lingerie Brands Changing the Game
5
24 Hours with Megababe Founder Katie Sturino
Rich FuryGetty Images

Is the Kardashians’ hairstylist offering a two-for-one deal on haircuts this week or something? After giving us a sneak peek at her fresh look on Instagram earlier in the day, Kim Kardashian debuted her new blunt cut bob at a charity fundraiser on Sunday. The chop is modern, bold and a total new look for the reality star—but it’s only when you see her standing alongside sister Khloe Kardashian that you realize her makeover may have been sliiiightly influenced by her sibling's recent cut. And by that, I mean they now have matching haircuts.

Kim appeared at the first annual "If Only" Texas Hold’em Charity Poker Tournament in California, alongside mom Kris Jenner and younger half-sis Kendall Jenner. The family clearly shared a dress code memo before arriving on the scene: all four were dressed head-to-toe in co-ordinated, all-black outfits.

Standing with model Kendall in a polka dot two-piece and Kris in a simple and sophisticated blazer, Kim and Khloé looked particularly co-ordinated. The new moms both opted for super shiny legwear, with Kim in high waisted PVC trousers and an American Apparel bodysuit, and Khloé in thigh-high boots with cycling shorts and a jacket. The matching sunglasses are also making me dream of a Kardashians Men In Black reboot, which is really something that Hollywood should look into. Kim later commented on Instagram stories how she and KoKo are officially part of the "moms with bobs" club for the summer.

Before you reach for the scissors, the straighteners and a spirit level to recreate the Kim/Khloé look for yourself, it's probably worth noting that their hairstyle might not be staying around for too long. Kim has already admitted over on Twitter that it took her a grand total of 24 hours to regret her decision.

She wrote: "Wait I miss my long hair” along with a crying emoji, so you can probably expect the extensions to make a return in a matter of hours. 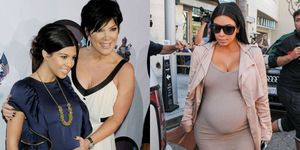 A Definitive Guide to Kardashian Pregnancies
Lucy Wood Contributor, MarieClaire.com Lucy Wood spends most of her time writing about celebby things, reading books, and waiting for the glorious day that she have enough millions for a pet sloth.
This content is created and maintained by a third party, and imported onto this page to help users provide their email addresses. You may be able to find more information about this and similar content at piano.io
Advertisement - Continue Reading Below
More From Beauty
At-Home Teeth Whitening Kits That Work Wonders
24 Hours with Megababe Founder Katie Sturino
Advertisement - Continue Reading Below
Sea Salt Sprays for I-Woke-Up-Like-This Hair
Pore-Cleaning Devices for Playing Dermatologist
Summer Fragrances for Your Seasonal Refresh
The Foundation Brushes the Pros Are Obsessed With
Found: SPF Sprays That Make Sun Protection Easy
Drew Barrymore Thinks Balance Is an Elusive Bitch
The Must-Have Products for Air-Drying Your Hair
5 Planet-Friendly Products To Try This Summer
Created for From Marie Claire for Created by Marie Claire for
Australian Gold