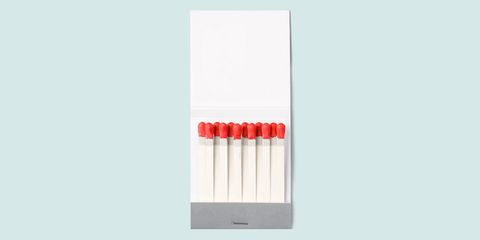 Was anyone else bummed when Crayola issued a statement that basically said "stop putting our colored pencils near your eyes because they weren't tested for that and you could get gooey discharge that spreads into the cornea, blinding you if you don't see a doctor?" Not because you actually thought it would work better than *actual* liner but because it seemed kind of MacGyver-ish and exciting? Oh. Um. Us neither.

A really glam Dangerous Liaisons-themed wedding happened this weekend, so all the socialites and minor nobility in attendance powdered their faces. For real life, mix in some spices and cocoa to match your skin tone and some nourishing oil to make it all adhere better. Skip the cinnamon, though—you'll see why soon. Of course, this could be a literal recipe for disaster—rainwater slurry!—so perhaps stick to your regular liquid formula on wet days.

Here are the only situations I could think of in which somebody would need to do this: 1) to even out a bad farmer's tan last-minute before a Special Occasion surrounding a holiday during which even retail stores close (so...Christmas?), 2) while suffering from extreme boredom, and 3) after discovering one's aversion to being hosed down with shimmery brown paint. The internet is super into this one, in any case, and recommends brewing a super-strong batch of black tea, spritzing your limbs with it, and letting it dry. It does stay—as long as you don't sweat.

Characters named River in YA books do this all time, and apparently,so did Dolly Parton when she wasn't allowed to wear makeup. For a slightly less analog method, here's a tutorial that combines activated charcoal, aloe vera, and beauty MVP coconut oil. Caution: It will move, which is excellent for a sooty, smudgy look but far less so for girls who want to buy your fitting-room rejects (if you don't follow these tips, that is).

Ultra matte, concentrated lip color for less than 20 cents? Sign me up! (Except when I've got any broken skin around my mouth because citric acid really stings, man). To use, open up a packet, wet your finger, dip, and pat on carefully. Let sit for a few seconds before you wipe/lick it off, then go back with a damp Q-tip to clean up the edges and any clumpy bits.

And this is why you couldn't put it in your foundation. Cinnamon irritates the skin, which is just swell (heh) if you're going for a temporarily inflated pout and aren't prone to food allergies. Stir a few dashes into some of your favorite salve, paint on with a brush, wait 3–5 minutes, then BAM—slightly swollen lips that last a few hours. And you didn't even need to make out with anybody. (Full instructions here.)

Chelsea Peng I'm Chelsea Peng, the assistant editor at MarieClaire.com.
Advertisement - Continue Reading Below
More From Beauty
The 3 Lipsticks I Have In Rotation Right Now
Why Using a Product With Peptides Is Worth It
Created for From Marie Claire for Created by Marie Claire for
StriVectin Peptight
Advertisement - Continue Reading Below
Line Edit: Eyeliner Trends That Are High Drama
Black-Owned Beauty Brands You Need to Know
The Body Lotion Your Dry Skin Has Been Craving
Know the Signs That Your Makeup Has Expired
Kendall Jenner Has Rapunzel Hair On 'Garage' Cover
WORTH IT: Royal Fern Skin Perfecting Essence
Blonde vs. Brunette: Celebs Who Made the Switch
My Top 3 Favorite Lipsticks Right Now