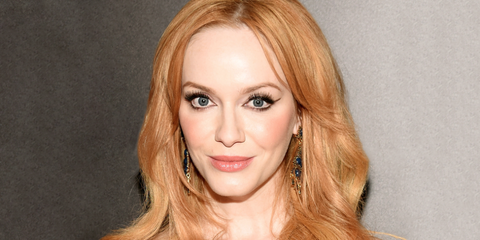 After 7 wonderful years, Mad Men has come to an end and we've had to bid adieu to the goddess that is Joan Harris. Whip-smart, glamorous, and fiercely unapologetic, she went from being the glue that held the Sterling Cooper Draper Pryce office together to HBIC of her own life as a single mom in yasss-queen fashion. If you think it's hard for us as a viewers to let go of Harris, you can imagine what saying goodbye to her breakout role is like for Christina Hendricks.

But as her 2015 projects and what's to come in the new year prove, she's keeping plenty busy—and oozing Harris-levels of perfection in the process. Here, we caught up with Hendricks, who has teamed up with Birchbox for the holidays, to talk gift-giving, beauty must-haves, life after Mad Men, and her new roles in Hap and Leonard, as well as American-Danish horror thriller film The Neon Demon (out March 2016).

Marie Claire: It's the holidays so we have to ask, what's the most special present you've ever received?

Christina Hendricks: Shortly after my husband and I started dating, he gave me a photography book on circus images from the early 1900s.  It touched me so much because he truly understood my aesthetic and interests in such a short amount of time.

MC: That's amazing. So what's your approach to gift-giving? We get the sense you're a pro.

CH: I like to look for gifts throughout the year.  If I find the perfect item for someone, I put it in my "gift closet" and keep it for the next holiday. But I often get too excited and just give it to them before! Many people on my list are getting Birchbox subscriptions—it couldn't be an easier gift or more fun. I find that people love it so much.

MC: How do you discover new products?

CH: I'm open to trying new things. That's why I think Birchbox is so awesome! It's something to look forward to and introduces me to something maybe I wouldn't have picked out, but fall in love with.

MC: What are your daily beauty must haves?

MC: You strike us as an old soul when it comes to beauty, who are some of your beauty icons?

CH: I admire so many women, it's hard to choose, but I've always loved Marilyn Monroe, Brigitte Bardot, and Mia Farrow.

MC: How do you remix your beauty routine for the holidays?

CH: I definitely am drawn to deeper reds and wine colors for lips and even cheeks during the holiday.

MC: And your go-to holiday cocktail?

CH: I have to admit, I do loooove eggnog.

MC: The forthcoming award season will be your last for Mad Men—how does that feel?

CH: It's sort of a strange feeling to be going to our last award show for Mad Men.  We've been so fortunate to go to so many for so many years. It's the end of and era for us, absolutely. It feels very final.

MC: We imagine parting with a character like Joan is bittersweet. How has your life changed after wrapping Mad Men?

CH: People come up to me and say how much Joan moved or inspired them on a daily basis, so I think about her every day, but I miss playing her terribly.

MC: Hap and Leonard is set to appear at Sundance. What can can you tell us about the series and your role?

CH: It's based on a series of pulp novels about two best friends and the sort of adventures they find themselves on together. I play Trudy who is a real femme fatale type but in a very unusual setting and in an unexpected way.  She's basically a nightmare!

MC: Your new film The Neon Demon has been described as a "horror film about vicious beauty." That's quite a theme. Can you hint at what we might expect both from the film and your character?

CH: Nicolas Winding Refn is a good friend and he asked me to play a role in Neon Demon. I haven't seen the film yet, but I play a cutthroat modeling agent to Elle Fanning's character.  It's my second time to get the pleasure of working with the talented and sweet Elle.

Lauren Valenti Associate Web Editor I’m the associate web editor at Marie Claire.
This content is created and maintained by a third party, and imported onto this page to help users provide their email addresses. You may be able to find more information about this and similar content at piano.io
Advertisement - Continue Reading Below
More From Beauty
Go Platinum Blonde Without Destroying Your Hair
Tried-and-Tested Skincare Products That Work
Advertisement - Continue Reading Below
Shizu Okusa﻿ Swears by Forest Bathing
Eye Creams That Work Wonders on Puffiness
Editor-Approved: The Best No-Streak Self-Tanners
This Could Be Your Adult Acne Super Treatment
Created for From Marie Claire for Created by Marie Claire for
Altreno
Liquid Eyeliners That'll Last All Day (and Night)
Moisturizers Your Dry Skin Will Soak Up
Coconut Oil Is the Secret to Great Hair
24 Hours with Beauty Icon Violette