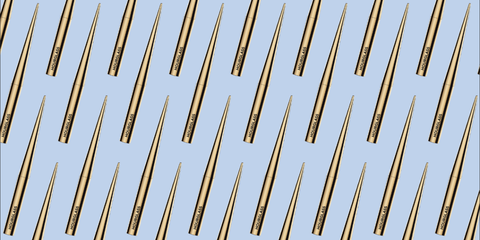 While clumps can be deliberate for a lush lash look, more often than not they aren't intentional and kind of inevitable—unless you've got Audrey Hepburn's OCD and the patience to take a pin and meticulously separate. every. single. lash. For ladies that just ain't got time for that, I present thee Hourglass' new Curator Lash Instrument, which is made of stainless steel,100% brushless, and for all intents and purposes beautiful. Like, MOMA-worthy, honestly.

But it's also kind of confusing. At first blush, a mascara wand without a brush seems like the equivalent of broom without bristles. Just a stick. But trust, it's much more than that. It is, after all, the brainchild of Hourglass founder Carisa Janes.

Janes' reasoning for turning the mascara wand game on its head was a desire to "tightline" the lashes, which is hard to do with a typical mascara wand. While this is a technique typically associated with eyeliner, you can use mascara to make the fringe seem thicker and fuller at the roots to sneakily define the eyes.

Here's how it works: The Curator is intended to be used with both the Curator Lash Primer in Ascent and the Curator Mascara pigment in Realist. First you, dip the dagger-like stick into the primer and coat your lashes with it. Then, after washing it off, you use the 360-degree instrument to glide and paint along every last lash. To get as close to the lashes as possible, gently pull up your lids and look down slightly so that it's easier to see the gaps between the lashes.

Because this sounds ridiculous unless you see it done firsthand or try it on yourself, get the play-by-play in the video below...

Lauren Valenti Associate Web Editor I’m the associate web editor at Marie Claire.
Advertisement - Continue Reading Below
More From Beauty Advice You Need Right Now
Sexy, Low-Maintenance Beauty Looks for V-Day
Why Argan Oil Is Your Skin's New Secret Weapon
Advertisement - Continue Reading Below
Why You Should Be Using Chemical Exfoliants
8 Best At-Home Laser Hair Removal Devices
Why You Should Switch to a Water-Based Foundation
10 Gorgeous Just-Got-Back-From-Vacay Bronzers
How to Get Rid of Your Broken Capillaries ASAP
These Mascaras Will Double Your Lash Volume
The Fall Makeup Essentials You Need Now
I Got Clip-In Bangs and They Changed Everything