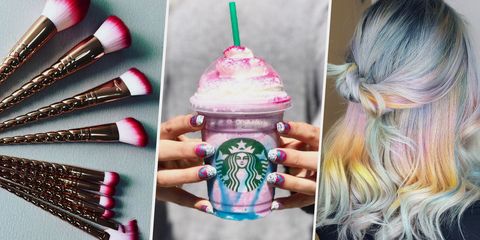 And with the creation of a second artificially colored and flavored Starbucks drink—truly, we have strayed so far from god's light—the inevitable end came. RIP unicorn trend, circa May 2016 –April 2017, cause of death: us.

Even while it began as gradient brows that "will make you feel like a magical unicorn," we all knew it'd happen eventually—because that's what we do. We name it. We make hair looks inspired by it. Then the makeup, the sugary beverages, and the nail art pile on, until the whole Fran(ken)chise has been so bopped and twisted, it can't do anything but collapse. So we move on to the next mythical creature (bye, mermaids, maybe hello to griffins)? Or maybe just another form of strobing.

The real question is, can anything *not* get love-bombed to extinction after we've whittled it into brushes, smeared it on toast, and embalmed it in clear lipstick? Can we love what we love without loving it to death?

Right now, we're having a really rough go of it. Like a kid who kills his goldfish by overfeeding it or, in the words of Manila Killa, different kids "eating sugar, getting sick, repeat," we make our most beloved trends go belly-up by holding on too tightly. It's partly a reflection of the way we live: now over later, more over less, faster over slower, glittery over matte, tonight over forever. There's nothing inherently wrong with the fads themselves either, however juvenile or gauche they can be, so what's bad, or at least bad-feeling, must be how easily we let go.

I didn't even like them, but I'm giving a eulogy of sorts for unicorns. But this is more they'll get from the rest of the internet, where "KIMODO DRAGONS ARE THE NEW UNICORNS" stories are already being saved in draft. This is the new Space Race, except, instead of beating the Soviets and advancing humankind, all we get it a split second of digital glory and maybe a superficial sense of togetherness, as in, "Dude, our Instagrams were in a roundup together!"

I don't feel bad about playing a part in killing the unicorn and then mourning it—and maybe resurrecting it years from now when it can be safely displayed behind the vitrine of nostalgia—because we're all complicit in this murder. I would just like the time to enjoy something before we got rid of it. But maybe that makes me weird.

Chelsea Peng I'm Chelsea Peng, the assistant editor at MarieClaire.com.
This content is created and maintained by a third party, and imported onto this page to help users provide their email addresses. You may be able to find more information about this and similar content at piano.io
Advertisement - Continue Reading Below
More From Beauty
Our Favorite Perfumes of the Year (So Far)
The Nail Trends for Spring Are All About Optimism
Advertisement - Continue Reading Below
These Shampoos Will Make Your Hair Grow Super Fast
24 Hours With Hailey Bieber
Acne Spot Treatments That Actually Work
Why The Lashify Control Kit Is Worth It
What to Buy From Sephora's Spring Savings Event
Hot Tools Are No Match for Heat Protectant Sprays
How to Tighten and Firm Your Neck Area
The Blue Shampoos Brunettes Will Love