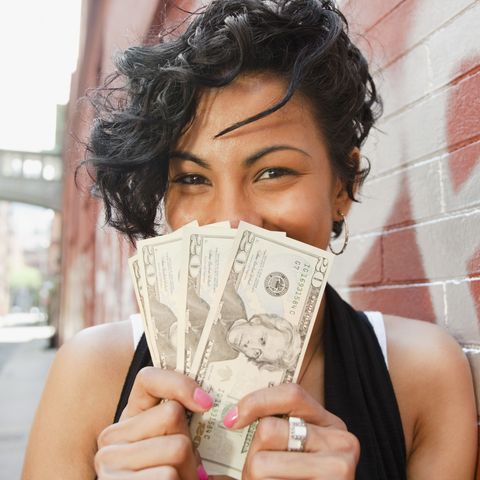 What's the secret to ending the wage gap? For Lauren Voswinkel, a software developer based in Pittsburgh, it came down to sharing her salary. On May 1 (International Workers' Day, a UK holiday), Voswinkel made a bold statement: She tweeted her job title, professional experience, and how much she makes—dollar for dollar.

The developer admitted it took her years, three job changes, and salary negotiations to realize how much she was really worth—and just how much she was being underpaid. "I just found myself thinking, how long have I been underpaid? How could I have prevented this? What was I missing?" Voswinkel told The Guardian. "And I realized it was mostly because of a lack of conversation around pay."

So the developer called for others to share their titles and salaries with the hashtag #talkpay in hopes to change how women think about their salaries *and* help increase awareness among all genders.

#talkpay working for USGov at 18F, my salary is $157,100 -- top of the GS payscale, but less than my industry equivalent

Now the question is—are you bold enough to share your salary?

Should You Bother Your Boss: A Flowchart

Samantha Leal Senior Web Editor I'm Sam, the senior editor at MarieClaire.com.
Advertisement - Continue Reading Below
More From Money & Career
Birchbox Boot Camp
The Couple With a Hugely Successful Finance Blog
Couples + Money
Advertisement - Continue Reading Below
Dating When You're $120,000 In Debt
How to Lead a Big Meeting With Confidence
The Couple Who Paid Off 21 Credit Cards
Couples + Money
How to Handle Being the Breadwinner
I Started a Company to Pay My Medical Bills
Shan-Lyn Ma Is Here to Save Your Wedding
These Mantras From Powerful Women Are So Inspiring
Created for From Marie Claire for Created by Marie Claire for
Stitch Fix
The Couple Who Paid Off $114K of Debt in Two Years
Couples + Money