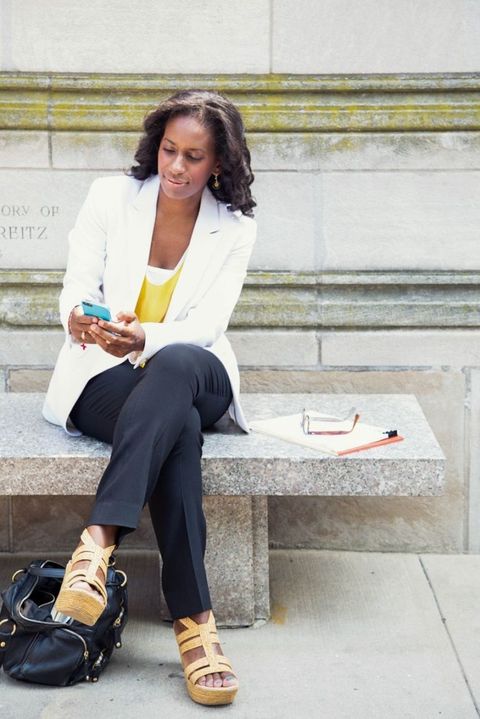 You know how some women spend their entire lives trying to break the glass ceiling? Well, Binta Niambi Brown is straight-up smashing it. A few years ago, the Brooklyn-resident was climbing the corporate ladder as a lawyer when she decided to switch gears and try something a little more creative. Fast forward one year later, and Binta is the co-founder and CEO of Fermata Entertainment, a development and management company operated out of Brooklyn. Even more slayage: the newly minted girl boss has also started a fan-driven label called Big Mouth Records, because that's how much of a go-getter she is.

After taking a huge risk by switching jobs and entering a new (and, let's be real, pretty male-dominated) industry, Binta's story is proof positive that playing by your own rules can lead to great things. But getting to that finish line? Kiiiiinda a process. Here are 10 ways Binta set herself up for success so that she could ditch the beaten path and start every day with a mic drop. (No, literally...she works at a record label.)

1. She put her fears on hold: "We don't have time to be afraid. I always wanted to run a music and entertainment company—it was always a bigger part of my identity than being a corporate lawyer—but I effectively suppressed that desire because I happened to be successful at something else. It was really hard to give up the income and prestige of being a lawyer, which was a lot of my identity. But you have to not be afraid to move forward."

2. She took a moment to mourn her past: "On a philosophical level, I had to mourn the ending of my old identity and give myself the space to be comfortable expressing who I am, and who I want to be. I had to not worry about people wondering if I'd lost my mind because everything was going well when I up and decided to start a music company. I had to shove those worries aside and allow myself to really come into my own."

"I had to embrace the fact that, whether I like it or not, I'm an entrepreneur at heart. So, what do I do about it?"

3. She embraced her new identity (with a makeover, no less): "Even getting rid of my shoes and buying cooler, funkier clothing helped me to say, 'this is my vibe,' as opposed to following a more rigid dress code and corporate mannerisms."

4. She got comfortable with taking risks: "I had to embrace the fact that whether I like it or not, I'm an entrepreneur at heart. So, what do I do about it? I don't have a gajillion dollars to invest in a company. I'm gonna have to risk not having an income for a while. I'm going to have to expect that this won't happen over night. What are the things I'm comfortable living without?"

5. She embraced the fact that changing jobs is (spoiler alert) a 24-hour job: "Every single second of my day is consumed with making my company work, servicing my artists, listening to music, thinking strategically, meeting new teammates—every minute of the day is geared toward building a successful company."

6. She took time to learn her new field: "I didn't jump right into it. I spent a year doing a research fellowship at Harvard to study new business models. But the scary thing is, you don't know how much you know until you start doing it."

7. She accepted criticism: "I don't internalize it. A lot of the time, the things people say to you have more to do with what's going on with them than with you personally. Occasionally I forget that, but I always try to listen, because usually there's something in there I can learn from."

"I want to learn everything I possibly can, but at the same time I have to be mindful that I'm not trying to do things exactly the way they've been done before."

8. She leaned on mentors, but didn't follow in their exact footsteps: "Mentorship is incredibly important, whether it's taking council from retired and current music execs, peers who are entrepreneurs themselves, or friends. I want to learn everything I possibly can, but at the same time I have to be mindful that I'm not trying to do things exactly the way they've been done before."

9. She refused to be defined by her doubts: "We all have fears and doubts. I work hard to not allow myself to be defined by my doubts, insecurities, and fears. I want to be aware of them, but not allow them to become obstacles. It's easier said than done."

10. She turned sexism and racism on their heads: "In some respects, I actually see my gender and race as an advantage. Not from the perspective of it making things easier, but from the perspective of, 'I know I have to work 150 to 200 percent harder in order to make this happen.' I like having my feet held to the fire, because I know the company's going to be that much better and that our ideas are going to be smarter. I don't think of it as being a disadvantage—I think of it as being a challenge."