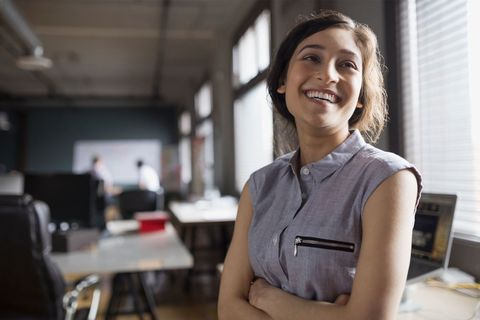 Early on I was like a chameleon, adapting to what I thought others wanted me to be. I didn't ask for what I needed, and I certainly never thought of "telling" them—instead I pushed my feelings down, pretended that I didn't need much of anything, and coped by overeating.

In my early 20s, I found a support group and was able to keep the weight off. But extra weight was only a symptom of my inability to deal with life. It had served as a protective armor, and I was terrified to let people know the "real me" and what I required.  I have to give myself credit though because during this time my desire to say what I truly felt was greater than my fear.

So what does this have to do with the idea of "telling, not asking"?  Well, as I began to get the confidence to assert myself, I started to "ask" for what I needed. Truth be told, I felt half entitled to go for it, while my other half felt unworthy. So when I asked for a raise I did it but on shaky ground—my voice trembling as I got the words out.  Asking can be a first step towards getting what you want, but realize you are NOT asking for permission.

When I began to realize that I knew as much as most people, and what I didn't know I could learn, I began to feel more confident. As I tested the waters with my newfound sense of self worth, I gravitated towards projects I was really passionate about.

I bartered a deal with The School of Media Arts where I used my sales experience to help them market their institution, while I was given the ability to enroll in their television production courses. Slowly, I developed the skills for my dream career: to host and produce television programs that would empower women and girls. Amazingly, right out of the gate, one of my television shows was nominated for a national Emmy (my show, Good Morning America, and CNN's newsroom were contenders). That young woman, who was so afraid to let you know who she really was, now had a powerful voice that could touch people in a profound way.

Today, I am known as an expert on women's empowerment issues and work doesn't feel like work because it is connected to a deep place within me.

As a result of my journey, I trust my experience and intuition most of the time.  The way I carry myself is more commanding.  I come from a spirit of service and "tell" what I require.  People respect my directness. "Telling" comes from a position of strength.

"When I began to realize that I knew as much as most people, and what I didn't know I could learn, I began to feel more confident."

When I "tell," I am not trying to "fit in" or not make waves or become like someone else.  I am simply stating the facts and claiming what's needed to bring about a desired result. Here's the difference between asking and telling:

Tell: Your body language is open and confident.

Ask: You don't own your power.

Tell: You care what others think but that isn't the only factor in making a decision.

Ask: You are more concerned with pleasing people than anything else.

Tell: You know you can survive and, in fact, thrive whether your pitch is adopted or not.

Ask: You are a little desperate and look for approval to make you feel better.

Are there risks with "telling?" Yes. There is a double standard—when men assert themselves they're praised, while a woman may be labeled aggressive.  If you ruffle some feathers, that is par for the course. If you ruffle the feathers of a power player, you may want to regroup and make sure you are delivering the message in the way that person can hear it—using "his" buzz words for example. You really don't lose anything by doing that, because you know what you're going after.

I've had the privilege of knowing some terrific C-Suite leaders over the past several years. They have been part of events I've run that encourage women to speak up on important issues. Jill Campbell, the COO of Cox Communications is one of these women.  She said to a group of 400 women—"If you're at the table there is a reason that you're there. So don't wait to be called on, say what's on your mind."  In other words, TELL!

Claire Babineau-Fontenot, Treasurer of Walmart, believes that the profitability of any business is a result of diverse opinions being voiced when important decisions are made. Claire advises, "If someone suggests a point of view which you know won't work, present options, and stand by the one that will. Don't wait for your turn, take it!"  In other words, TELL!

These empowered leaders tell it like it is. Sure they've encountered resistance, but that didn't stop them because they were doing what was best for all involved.

So if you are not used to "telling," how do you get started? You take one step, then another, and another. Say what's on your mind at a meeting, with conviction. (If you're knees are shaking, no one will know).  Practice at home in front of a mirror if need be. I've done that many times.

The bottom line is that we need your "voice".  The world is in a turbulent place and we need more women stepping up at all levels. There's no time to waste.

Helene Lerner is the author of The Confidence Myth: Why Women Undervalue their Skills and How to Get Over It, and founder of the website Women Working.