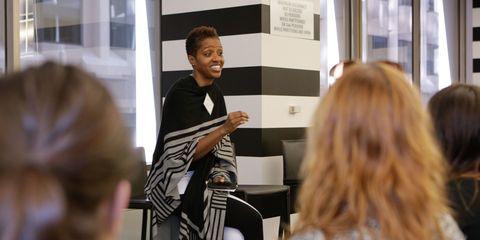 Tara Roberts has been surrounded by women her entire adult life. From her past work as a magazine editor at Essence and CosmoGIRL! to her current role as co-founder and CEO of GirlTank, a collective of female entrepreneurs, Roberts' lifelong goal has been consistent: "to empower women through the media," she says.

"We wanted to create a place where you could come in and say, 'This shit is hard.' And 'I suck."

GirlTank organizes events and workshops where like-minded female innovators can talk out their problems and build solutions together. The idea stemmed from Roberts' world travels: She interviewed women from Senegal to Vietnam tackling issues like girls' education, sex trafficking, and climate change. Roberts saw many communities with the same goals — and the same administrative or funding problems. "I thought, let's get female change-makers together, in the same room, so they can share their knowledge," she recalls. "We live in a world where everyone tries to put on their best face, but we wanted to create a place where you could come in and say, 'This shit is hard.' And 'I suck."

The desire to bond may be a female stereotype, but Roberts doesn't see it as a bad one. "The fact that women are relational, it's just what it is. Having safe spaces to connect with other like-minded women is crucial, vital," she says. "Many women work out their problems by talking them through. And I don't mean to sound so broad — of course different women process differently — but what we've experienced is instant deep breathing, a relaxing. It feels good in the soul."

"It's a strength to be relational. It's a good thing to be communicative."

In fact, Roberts is fond of emphasizing typically "female" behavior in the working world. While critics often emphasize mistakes women make in male-dominated offices — like using too many exclamation points or cutesy language in emails — Roberts champions a different tack. "Maybe we should stop telling women all the things they're doing wrong and focus on what they're doing right, how they benefit a workplace," she says. "It's a strength to be relational. It's a good thing to be communicative."

To that end, she also has a different take on finding a mentor. "Kathryn Minshew, who started the Muse, once said that you should talk to someone who is six months ahead of where you want to be," she explains. So instead of seeking out advice from someone a generation ahead of you, look to a person just one step ahead — who has handled issues you haven't run into yet. Hey, just another way to locate that "deep breath of the soul" GirlTank aims to provide.