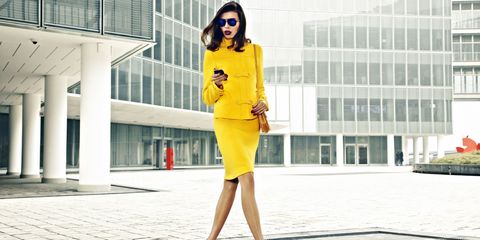 Are you so over the cubicle? Sick of getting turned down for promotions? Take your career cues from TV's HBICs and say buh-bye to fetching coffee for good. (You're welcome.)

Let's not kid ourselves that real-life female politicos don't consider the power of appearance. (Ahem, Hillary Clinton, self-proclaimed "pantsuit aficionado.") Though the Veep's a perpetual Beltway punch line—she's more intent on staying in power than doing anything profound with it—Selina Meyer still ekes out the thinnest veneer of gravitas thanks to her killer wardrobe (a mix of Dior and Prada), which is both conservative and sexy, a credible cover for her total incompetence.

2 The Boss Isn't Your Friend: Annalise Keating, 'How to Get Away With Murder'

As the law students who earn a coveted spot on Annalise Keating's staff can attest, the real takeaway is how to please a hard-ass manager. Keating doesn't laugh at jokes and never joins her crew for happy hour. Try charming her and risk spending the night writing briefs. The colleagues she does confide in most are those who, quite simply, keep their heads down and do the work (superbly). Anything more than that isn't in your job description—or hers.

3 Go Ahead and Be Your Silly Self: Dr. Mindy Lahiri, 'The Mindy Project'

For years, women have been told to dial down their femininity at work lest they lose credibility with their male colleagues. But Dr. Mindy Lahiri, the Real Housewives–obsessed, Katy Perry–quoting dynamo obstetrician, is glittery, hot-pink proof you can be unapologetically girly—"You're not Mindy; you're a warrior, and your warrior name is Beyoncé Pad Thai"—and still kick some major ass at work.

4 Always Treat People Well (They Remember When You Don't): Red, 'Orange Is the New Black'

At Litchfield Penitentiary, she who runs the kitchen rules the roost. For a while, that was Red, a no-bullshit, mobbed-up Russian who demands obedience from her favorites. Sure, she's vindictive—remember when she starved Piper for insulting her food?—but she looks after her girls with an almost maternal pride. The payoff: When she's ousted from her powerful perch by rival Vee, her girls rally behind her.

5 What Made You a Great Candidate Won't Necessarily Make You a Great Boss: Daenarys Targaryen, 'Game of Thrones'

Quickie primer on how to spot a GirlBoss: She's the one who emerges from an inferno cradling three baby dragons. But while Khaleesi has conquered a slew of corrupt cities, freeing thousands of slaves along the way, she still proved tentative and ill-advised in Meereen, and spent season five fending off rebellion. It takes more than a sweeping vision to run an empire, and it turns out even the charismatic Mother of Dragons could have used a master class in management.

Both Frank and Claire Underwood are manipulators writ large, compromising whatever scruples they have—in Claire's case, leveraging her own rape to conjure sympathy when she needs it most—in their bid to conquer the White House. But it is Claire, a Beltway Lady Macbeth, who steers this marriage, never underestimating the importance of networking and image buffing, with anunwavering eye for the end goal, as she advises her on-the-outs husband to prostrate himself before the president: "Cut [your heart] out and put it in his fucking hands."

7 You Are Who You Are—So Own It: Cookie Lyon, 'Empire'

She's not the most polished exec at Empire Records—serving a 17-year prison stint will do that. But whether she's navigating a PR crisis threatening to destroy one of her top singers ("All right, look, girl: I don't judge, but you's a freak, and that's a good thing—we can sell that") or schooling her own son for dialing up his faux street cred ("You need to stop rappin' like you from the streets, 'cause you not about that life"), Cookie Lyon owes her success to always keeping it real.

What to do when you're an emotionally unhinged CIA counterterrorism agent with fierce instincts about who the bad guys are? In the case of Carrie Mathison, you do what your gut tells you to, no matter the cost, whether it's exposing a celebrated war hero as a jihadist or thwarting an attack on U.S. soil. Mathison never waits around for permission. True, there are inevitable consequences, like getting raked over the coals by the Senate and committed to a psych ward by your mentor. But that's what makes Mathison such a brilliant agent: She gets the job done every time.

This content is created and maintained by a third party, and imported onto this page to help users provide their email addresses. You may be able to find more information about this and similar content at piano.io
Advertisement - Continue Reading Below
More From Quit Your Day Job
8 Things You Should Always Do After Networking