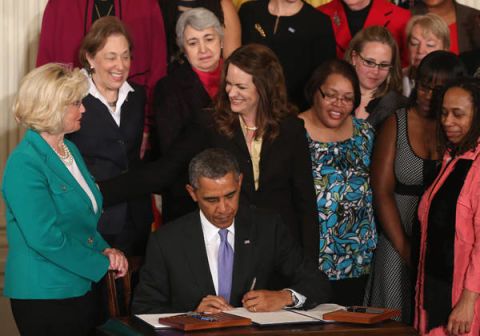 At this year's White House Correspondents' Dinner, comedian Joel McHale joked that no job is exempt from pay disparity, observing that "as our first female president, we could pay [Hillary Clinton] 30 percent less." The gender wage gap—a term broadly used to describe the fact that American women to continue to make only 77 cents to every dollar earned by American men—has captured the nation's attention.

While some lawmakers have tried to blame these shocking figures on the fact that men simply work harder than women (see recent comments by New Hampshire state Rep. Will Infantine), working women around the country who are being paid less know that this simply isn't the case. Last year, on the 50th anniversary of the Equal Pay Act, Equal Rights Advocates and other leading women's rights organizations launched the Equal Pay Today! Campaign to tackle this persistent gap that plagues nearly every industry in the country. Through this campaign, and in fielding calls to our Advice and Counseling Hotline, we''e heard from women across the country who suspect they are being paid less, but wonder, "How do I know for sure?"

In her powerful dissent to the Supreme Court's misguided Ledbetter v. Goodyear Tire decision, Justice Ruth Bader Ginsburg emphasized that pay discrimination is very often "hidden from sight." She wrote that because salary information about fellow workers is typically confidential and unavailable for comparison, pay disparities can be hard to discover. Indeed, a 2011 study by the Institute for Women's Policy Research found that over 61 percent of private-sector workers say that discussing their salary is either prohibited or discouraged. Pay secrecy policies are often accompanied by an understanding—explicit or unspoken—that discussing or inquiring about pay could lead to negative job consequences. Ultimately, a lack of information about what their male coworkers are paid, and a fear being punished for asking about it, prevent women from ever even finding out that they're victims of pay discrimination. This culture of silence and fear is even more harmful in low-wage sectors, where workers can't afford to risk their jobs by asking about pay.

Equal Rights Advocates client Lucy Marsh learned after 40 years as a celebrated law professor at University of Denver Sturm College of the Law that she and other female professors earned less than male professors with similar qualifications. Pay rate information would have alerted Professor Marsh to this inequity years and possibly decades ago, preventing significant financial losses over the course of her career. Recent studies suggest that the lifetime wage gap for a woman with at least a bachelor's degree is $723,000, while professional school graduates lose $2 million in wages over a lifetime.

We know that pay secrecy directly undermines efforts to reduce the gender wage gap. And we know that we can do something about it. In fact, the Paycheck Fairness Act, which Senate Republicans blocked just last month, would prohibit retaliation against employees who share their salary information with each other, eliminating the culture of silence that keeps women like Professor Marsh from ever finding out they're being paid unfairly.

In addition to federal law protection of all employees, we need workplaces that encourage transparency and support openness about pay. How that might look depends on the nature of the employer—for example, in a large company, employers could easily provide anonymized salary information with job titles and gender breakdown to let employees know where they stand.

What's certain is that successfully ending the gender wage gap will take a combination of legal protections and action by employers dedicated to solving this problem. Don't you think we should be allowed to talk pay?


Joelle Emerson is a Skadden Fellow at Equal Rights Advocates.

This content is created and maintained by a third party, and imported onto this page to help users provide their email addresses. You may be able to find more information about this and similar content at piano.io
Advertisement - Continue Reading Below
More From Money & Career
#2MillionMinutes Wants Women Back on Their Feet
God-is Rivera on Tweeting Inclusion
Advertisement - Continue Reading Below
The Founder Who Got Meghan Markle to Invest
Event Planners' New Plans
A Day in the Life of the Super Bowl Referee
Created for From Marie Claire for Created by Marie Claire for
Activia 2017
Meet the Woman Leading the Super Bowl LV Flyover
Marcella Nunez-Smith Is Tackling COVID Equitably
140,000 Jobs Were Lost In December—All Women's
Allison Statter Is More than Kim Kardashian’s BFF
Questions to Ask During a Job Interview