In a year the world really does seem to have gone topsy-turvy, how apt is it that the 2018 Pirelli Calendar has gone down the rabbit hole to match? But while photographer Tim Walker professed during a press conference in September that he had no other intention than to retell Alice's Adventures in Wonderland to celebrate black beauty in its various shades and configurations, the upside-down-ness of his miniature universe still feels like a defiant inversion of the one outside it.

The upside-down-ness of his universe feels like a defiant inversion of the one outside it. 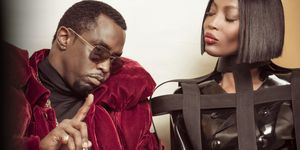 Inside the Making of the 2018 Pirelli Calendar

"It is very important that the story of Alice be told to a new generation," said stylist Edward Enninful in a press release. "Her adventure in Wonderland resonates with the world we live in today; obstacles we have to overcome and the idea of celebrating difference…To see a black Alice today means children of all races can embrace the idea of diversity from a very young age and also acknowledge that beauty comes in all colors...Projects like this remarkable Pirelli Calendar demonstrate that there is still hope in what sometimes feels like an increasingly cynical reality."

A fantastic lightness, as told by a dark children's story. Here, a sneak peek of four of the intricately wrought photos within.

Tim Walker
Chelsea Peng I'm Chelsea Peng, the assistant editor at MarieClaire.com.
This content is created and maintained by a third party, and imported onto this page to help users provide their email addresses. You may be able to find more information about this and similar content at piano.io
Advertisement - Continue Reading Below
More From Celebrity
Kate and William Holiday In Cornwall
Blake Lively Wears a Pink Sequin Dress
Advertisement - Continue Reading Below
Meghan Markle Hangs Out With Melissa McCarthy
Simone's Boyfriend Sent Her the Sweetest Message
What Happens on Katie's Season?
Rebel Wilson Recreated This Britney Spears Look
Jennifer Lopez Flew Back From European Getaway
Jennifer Lopez Wears Old Bracelet From Ben Affleck
Simone Biles Cheers on MyKayla Skinner
See the Royals Socialize at a 1991 Cocktail Party