Jimmy Kimmel stepped away from Jimmy Kimmel Live last week to be there for his son Billy as he underwent his second heart surgery. But the host returned on Monday night with his 7-month-old baby in his arms, and struggled to fight back tears as they took the stage together.

"I was out last week because this guy had heart surgery. But look he’s fine everybody, he may have pooped but he’s fine," he says in the clip above. "Daddy cries on TV but Billy doesn’t…it’s unbelievable."

Back in May, Jimmy revealed that his son had to have open heart surgery at just 3-days-old due to a congenital heart condition. Last night, he explained that Billy just has one more surgery left: "Billy is doing great, by the way. He has one more surgery. This is amazing, he had an operation a week ago. They say he’ll probably on track to win at least a bronze medal at the Olympics in 2036."

The host ended his monologue with a shoutout to the Children’s Health Insurance Program, reminding viewers that, "Overwhelmingly, Democrats and Republicans supported it. Until now. Now, CHIP has become a bargaining chip. It’s on the back-burner while they work out their new tax plans. Which means parents of children with cancer, and diabetes, and heart problems are about to get letters saying their coverage cut be cut off next month. Merry Christmas, right?"

If this issue is important to you as well, it's not too late to call your representatives and make your voice heard. 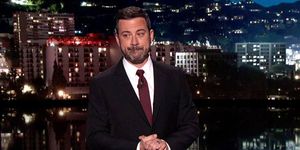 Jimmy Kimmel Reveals Son's Health Problems
Mehera Bonner Contributor Mehera Bonner is a news writer who focuses on celebrities and royals—follow her on Instagram.
This content is created and maintained by a third party, and imported onto this page to help users provide their email addresses. You may be able to find more information about this and similar content at piano.io
Advertisement - Continue Reading Below
More From Celebrity
Camila Cabello's Hair Has *Never* Been This Short
Diana's Note About Her BBC Interview Is Missing
Advertisement - Continue Reading Below
Melania Didn't Want to Hold Trump's Hand Again
Twitter Is Living for Blue's Cameo in New Video
Will *Hated* How Archie's Birth Was Handled
Hear Adele's American Accent in This 'SNL' Promo
Meghan and Harry's Super Famous New Neighbors
Ryan Trolled Blake Over Those Drawn on Shoes
Charles Caused Chaos at the Queen's Coronation
Noah's Naked Bodysuit Look is Everything