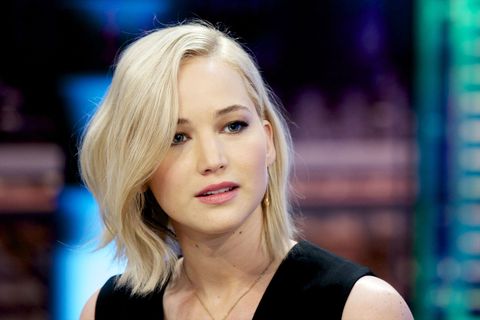 After initiating an important conversation about the gender pay gap in Hollywood with a very poignant essay months ago, Jennifer Lawrence's bold move was met with much appreciation from other females in the industry—and even support from male actors like Bradley Cooper.

And while it seems  pretty much impossible to find anything wrong with Lawrence's push for women to receive equal compensation, one celebrity—who knows nothing about being a woman in the biz, or about being woman whatsoever—has expressed his opinion on the matter. Ladies and gentlemen, a (rather unwarranted) word from Chris Rock.

"You hear Jennifer Lawrence complaining about getting paid less because she's a woman—if she was Black, she'd really have something to complain about," the comedian told the New Yorker in a profile of his good friend Leslie Jones. "Black women have the hardest gig in show business."

Without discrediting Rock's argument, it should be noted that Lawrence's criticism has already inspired an update to California's Fair Pay Act, a bill that benefits all women by ensuring equivalent salaries to men's—regardless of race or cultural background.

"I don't think I've ever worked for a man in charge who spent time contemplating what angle he should use to have his voice heard. It's just heard," the Joy star wrote back in October. "I'm over trying to find the 'adorable' way to state my opinion and still be likable! F—k that."

This content is created and maintained by a third party, and imported onto this page to help users provide their email addresses. You may be able to find more information about this and similar content at piano.io
Advertisement - Continue Reading Below
More From Celebrity
Gaga Stuns in a Wedding Dress for 'House of Gucci'
Prince Harry Is Quarantining at Frogmore Cottage
Advertisement - Continue Reading Below
Meghan Markle Expresses Sympathies to the Queen
Prince Harry Remembers Prince Philip
Prince William Statement on Prince Philip's Death
Meghan and Harry Are Facing Security Threats
Selena Gomez Is Drenched in Fake Blood on Set
Amanda Seyfried Talked About Having Panic Attacks
Harry Arrives in the U.K. For Philip's Funeral
Matthew Perry Deletes 'Friends' Reunion Instagram