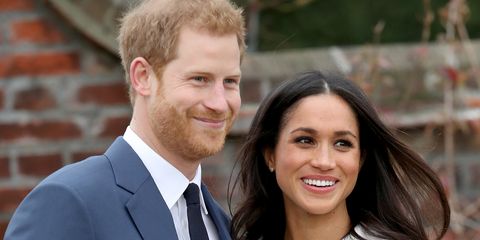 According to a new report in the Daily Mail, Prince Harry is planning on inviting two of his ex-girlfriends to his forthcoming nuptials.

Apparently both Chelsy Davy and Cressida Bonas will be getting invitations to the prince's royal wedding to Meghan Markle. A source tells the Daily Mail, "Harry has stayed good friends with Chelsy and Cressida, so they will be there. He made sure there were no hard feelings when they split up. I don’t think Meghan will mind." According to the report, Markle allegedly doesn't mind that Bonas and Davy will be attending.

Prince Harry famously started dating Chelsy Davy in 2004. They met in Cape Town while Prince Harry was on his gap year. Their on-off relationship ended for good in 2011, though the pair apparently remained friends.

Cressida Bonas was introduced to Prince Harry in May 2012, by her friend Princess Eugenie. Reports in 2013 claimed that the prince was ready to settle down with Bonas, but that she wasn't ready. This was, allegedly, down to the age gap between them.

As a source told The Telegraph at the time:

"That the Prince, who turns 30 next year, wanted to settle down with Miss Bonas, 24, was no secret. Her free-spirited ways were said to have captured the heart of the man labeled 'the party prince' and he was smitten as soon as he was introduced by his cousin, Princess Eugenie, in May 2012. But she felt too young to marry."

Prince Harry and Meghan Markle's wedding is due to take place on May 19, 2018.

Amy Mackelden Amy Mackelden is a freelance writer, editor, and disability activist.
This content is created and maintained by a third party, and imported onto this page to help users provide their email addresses. You may be able to find more information about this and similar content at piano.io
Advertisement - Continue Reading Below
More From Celebrity
Simone Biles Is Honored With Her Own GOAT Emoji
Kate Winslet Reveals Her Favorite Red Carpet Look
Advertisement - Continue Reading Below
Margot Robbie Had a Life-Size Cutout of John Cena
Jennifer Lopez and Ben Affleck Are IG Official
Celebs Share Their Emotional Infertility Stories
14 Candid, Unseen Photos of the Royal Family
Rare Photos From Diana and Charles' Wedding
Ariana's Former Home Has an IMAX in the Building
Cardi B Stunned in a Cherry Red Mugler Dress
Kate Beckinsale Reveals She's Never Been on a Date