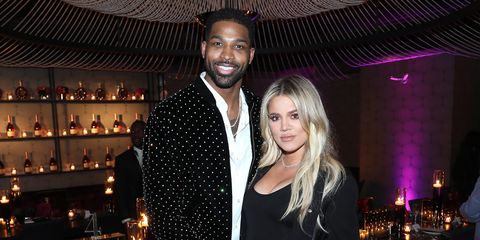 On Tuesday afternoon, footage leaked that appeared to show Tristan Thompson getting very (read: inappropriately) cozy with a woman who was one thousand percent notKhloé Kardashian. The first video, published by the Daily Mail, appears to show Thompson kissing a mystery woman later identified as 28-year-old model, Lani Blair, by Page Six. Later, a second video surfaced, this time published by TMZ, that appeared to show Thompson cheating with two women (the TMZ footage was from October).

Khloé is very pregnant and reportedly in Cleveland, preparing for the birth of her first child with Thompson. As rumors of his infidelity swirl, the Kardashian fam have rallied around the mom-to-be, according to ET Online.

"Kris has gathered the family and made sure they would all be there for her," a source told the website. "They are so excited for Khloé. Her sisters are being super supportive of her… her family is rallying around her."

Which, you know, duh. The Kardashian-Jenner family is notoriously close and fiercely protective of their own, so this comes as absolutely zero surprise. The source also says that the videos and surrounding allegations have coming as a shock to the family, who "really like Tristan and have welcomed him into their family."

"At this point, Khloé's family wants nothing more than to believe that he is a stand-up guy and that this was a setup," the source said. "But only time will tell."

No matter what, Kris and the rest of KarJenner clan are focused on making sure that Khloé is focused on what matters now—giving birth to her daughter.

"The video hasn't stopped the Kardashians from making sure her day will be one of love and respect. They won't let any news change the importance of how beautiful this birth is for Khloé," the source said. "They want her to focus on having a healthy experience."

Kayleigh Roberts Contributor Kayleigh Roberts is the weekend editor at Marie Claire, covering celebrity and entertainment news, from actual royals like Kate Middleton and Meghan Markle to Hollywood royalty, like Katie Holmes and Chrissy Teigen.
This content is created and maintained by a third party, and imported onto this page to help users provide their email addresses. You may be able to find more information about this and similar content at piano.io
Advertisement - Continue Reading Below
More From Celebrity
Bennifer Recreated Their 2002 PDA Moment
Why Harry's Memoir Release Date Has Upset People
Advertisement - Continue Reading Below
The Royals Are Worried About Prince Harry's Memoir
Gabrielle Union Debuted a New, Short Haircut
J.Lo Made Out With Ben on IG for Her 52nd Birthday
Harry Is Putting the Queen in a Difficult Position
Are Will & Kate Sending a Message to Harry & Meg?
Harry and Meghan Reportedly Have a Four-Book Deal
Naomi Osaka Lit the Olympic Cauldron in Tokyo
John Legend Performed "Imagine" for the Olympics