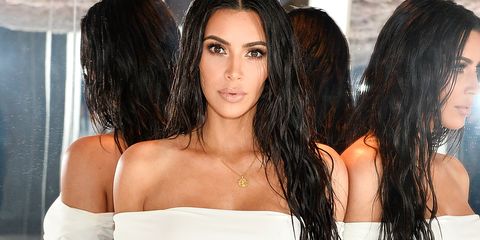 Earlier this week, Kim Kardashian revealed that the bottle for her latest fragrance, KKW Body, would be an exact model of her own body. Kim documented the process of having her torso molded for the project on Instagram:

We took a mold of my body and made it a perfume bottle. @kkwfragrance

"We took a mold of my body and made it a perfume bottle," she explained in the caption of a picture of her body slathered in plaster for the mold.

Then, last night, Kim unveiled the finished, sculpture-like bottle on her Instagram Story. The bottle features Kim's chest and hips, but not her arms, legs, or head.

And this is the reason why Jean Paul Gaultier’s iconic perfume is called Classique. #nothingbeatstheoriginal pic.twitter.com/lSd07aB5wn

Well done to @KimKardashian for making her perfume bottle in the shape of her body. Just the 15 years behind Jean Paul Gaultier 👏🏼

Kim really thinks we all want her body so she made it perfume bottle. The ego. It’s a bootleg version of the Jean Paul Gaultier original body shaped perfume. pic.twitter.com/jtTPCIfcyx

The bottle of Kim Kardashian new fragrance is kind of a knock off of Jean Paul Gaultier’s CLASSIQUE perfume. Or maybe she was just inspired by it...

Jean Paul Gaultier even responded to the controversy, appearing to throw shade at the KKW bottle on Instagram.

"Keeping up with the fragrance's news! #Classique #JeanPaulGaultier," the Parisian house captioned the photo, in what seems to be a reference to Kim's long-running reality show, Keeping Up With the Kardashians.

Which some fans were HERE for.

She also revealed that the body molds weren't just used for miniatures—apparently a full-sized naked Kim sculpture exists, too.

"We were making a mold of my body for the fragrance, but we were also making it to make a big sculpture," she said.