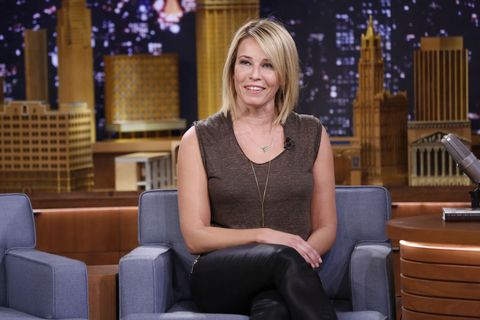 2. Best career advice I've gotten: It doesn't matter how many people say no. All it takes is one person to say yes.

3. Most gracious response to career setback: The most gracious thing to do is to not comment on anything, but I'm incapable of that sort of elegance.

5. The three qualities that got me where I am today: Determination, belief, humor.

6. Moment I felt I made it: When I heard a DJ on the radio announce my birthday.

7. Most agonizing career decision I've ever made: Quitting a reality show that I hosted right when my show [Chelsea Lately] started on E!. I was so bad at hosting reality, and it was a Steven Spielberg show, and I had to get out because I sucked so badly.

8. The easiest career decision I've ever made: Moving to Netflix. My baby.

9. Kind of work I'd do for free: Listen to people.

10. Favorite perk of the job: Feeling like what I say may matter to someone.

11. Worst pitfall of the job: I get to dance around a beautiful house in my underwear while drinking a vodka. No pitfalls.

12. What my career will look like in 5 years: Who knows? I'm the worst planner. I know I won't allow myself to be bored.

13. Change I'd like to see in my industry: I want people to stop having to discuss gender disparity.

14. How I made my first dollar: I folded t-shirts in the back of a T-shirt store in Martha's Vineyard because it was illegal to be working at 13.

15. Who do you admire and why? I admire my best friend Mary McCormack for her love and devotion to her children.

18. Song that always makes me cry: No songs make me cry.

19. Movie that had the greatest ending: Terms of Endearment. That's real life. People die and break your heart.

20. Song I want played at my funeral: "Rolling in the Deep."

My sissies and me. #colbertshow

21. First album I bought: I've never bought an album, but my first concert was Bon Jovi in New Jersey.

22. On my bucket list: I don't make lists. I can't organize. Things just have to appear.

23. If I could live in a foreign country, it would be: I love Spain. From the top to the bottom.

24. What every woman should try once in her lifetime: To jump off a cliff. Or out of plane. To jump.

25. How my perfect day begins: With my dog, Chunk, rolling around in bed when I scratch him in the morning with his sleepy face, and someone bringing me a really cold green juice on a tray. I like luxury.

Chunky, gearing up for the weekend.

26. How my perfect day ends: Fucking someone I love.

27. One thing I'm exceptionally good at: Telling you what I think. I'd like to get less good at it. It's not popular.

28. One thing I'm epically bad at: Long division or anything make-believe.

29. Superhero power I'd want to have: I don't believe in superheroes. I only believe in Smurfs.

30. How do you clear your mind after a crappy day? I read a book. I always read to get myself out of myself. Or I go to Mary's house.

31. Something nice I did for myself recently, because hey, why not: I am always doing nice things for myself. I like to remind myself I'm on my side.

32. If I could compete in an Olympic sport, I'd like it to be: TENNIS!

33. The last time I felt beautiful was: While writing this...

34. The beauty essential you have to pry out of my cold, dead hands: Liz Earle serum. I slather it on my face several times a day.

35. My first kiss: With a guy I met in Martha's Vineyard named Justin. He looked like Brad Pitt, and I was so disgusted by having a man's tongue in my mouth. Who knew.

36. The three qualities I thought I wanted in a partner: Smart, handsome, funny.

38. Advice to a woman with a broken heart: It gets better. Broken hearts turn into beautiful hearts.

39. Relationship advice to my younger self: There are other fish in the sea. Tons of fish.

40. Moment I knew I was in love: I've always known that I would love a man the moment I met them. Three times.

41. The craziest thing I did for love: Chartered a plane for $200,000 to meet him. I WILL NEVER DO THAT AGAIN. IDIOTIC BEHAVIOR.

42. What my high school boyfriend would say about me: I think he's in jail. He probably thought I'd be.