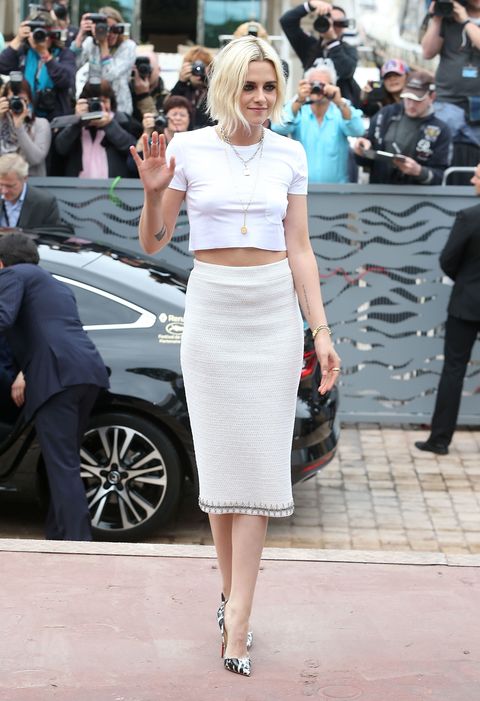 Kristen Stewart's new shaggy, platinum blonde 'do is the rebellious hair transformation we all wish we could pull off. With Stewart's edgy style, it almost seems like she's been blonde all along. But, as People reports from the Cannes Film Festival, it turns out there's a particular reason the actress changed up her naturally brunette locks—and it wasn't for any upcoming role.

"I've always really stayed neutral since I was like 10 years old," Stewart explained. "So I was like, 'I'm gonna direct a short, and I'm gonna f—k up my hair."

By "f—k up" we assume she mains change up, since it looks impressively chic and healthy for such a dramatic change.

The 26-year-old actress elaborated saying, ""I just did like five movies over a two-year period, and I think it's a very good decision for me right now to stop acting in movies for just a moment, and I've never really done that, I've never changed my appearance."

We're always down for trying out a new look and we're particularly into this bleach blonde vibe, so good for you KStew!

This content is created and maintained by a third party, and imported onto this page to help users provide their email addresses. You may be able to find more information about this and similar content at piano.io
Advertisement - Continue Reading Below
More From Celebrity
Queen Trolled Tourists Who Didn't Recognize Her
Blake and Ryan Recreated Their First Date on IG
Advertisement - Continue Reading Below
Charles Expertly Ignored Boris Johnson's Snafu
How Kitty Spencer's Wedding Dress Honored Diana
Dolly Parton On the #FreeBritney Movement
Will & Kate Are Nervous About George's Future
George Won't Be Forced to Go to Boarding School
Diana Would Have Written a Memoir Too, Friend Says
A Slice of Diana's Actual Wedding Cake Is For Sale
Matt Damon Trolled Ben Affleck and Jennifer Lopez