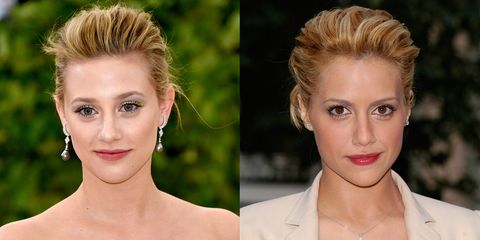 Lili Reinhart was all Twitter could talk about Monday night during the Met Gala. People were freaking out when she and her Riverdale co-star Cole Sprouse basically confirmed their offscreen relationship by walking the carpet together (which, yay!). And a whole bunch of non-shippers were freaking out because they noticed Reinhart looks exactly like beloved '90s actress Brittany Murphy.

You can see it now, right? Twitter was going crazy comparing the Clueless actress and Reinhart, and one user even took the time to find pictures of the two actress' in similar poses with the same exact hairstyles.

She tweeted: "Hi yes, why aren’t there any conspiracies about lili reinhart and brittany murphy being the same person, because they literally look exactly the same & im convinced brittany was reincarnated as lili thanks."

Other users chimed in, too.

If @lilireinhart doesn’t portray Brittany Murphy in a movie I’ll be so upset because that’s PERFECT casting. Could you IMAGINE??? 🙏🏻

Okay but can we just talk about how you look so much like Brittany Murphy 😩 👯‍♀️ pic.twitter.com/lVkZcSD2Qy

We have to admit, the two do look eerily similar.

In case you're wondering, yes, Reinhart knows how much she looks like Murphy. “Everyone says Brittany Murphy—everyone. They think I’m her reincarnated,” Reinhart said in a 2017 interview with Buzzfeed. “There are a lot of pictures of us side by side where we look crazy–alike. If you just google Lili Reinhart and Brittany Murphy, you’ll see it.”

Reincarnated? Maybe. Doppelganger? Definitely. Let's just say, if Hollywood ever decides to make a movie about the late actress, they should 100 percent cast Reinhart to play her.