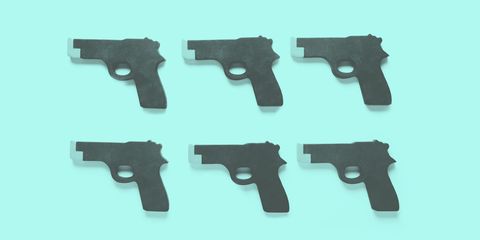 After I was attacked at gunpoint in my own home, I never wanted to be there again.

In fact, I only went back once after everything died down—after the police left and the report was filed and I was taken to the hospital, where I was deemed physically fine but deeply shaken.

Much like Kim Kardashian, I did not want to waste any time—I gave my statement, packed up, and left. But first, just a day after it happened, I had to return to the very room where a man held a gun to my face. My sisters and my friends helped me get all my stuff and put it in my sister's garage. That was it. I stayed with my boyfriend for the next 30 days.

"Safety is something that you never really value until it's been taken from you."

For a long time afterward, I just couldn't be alone—not even for tiny pockets of time. Safety is something that you never really value until it's been taken from you, and I had no idea how to get it back. I started having bad dreams and flashbacks of the few crucial moments where my life could have been taken from me. I got a dog and that helped, because it made me feel like I wasn't totally alone even when I was. But sometimes leaving the house to be with people was even worse: I was hyper-aware of my surroundings and of anyone I passed on the street. I just couldn't come down from the constant anxiety of what had happened to me.

Here's what that was: I was 27, and had managed to save up enough money at my tech company job to buy my first house. As I was packing up my rental apartment for my move late one Saturday morning, I propped open my door so I could more easily come and go. I was gathering my laundry when I noticed a man pass by my window. That's odd, I thought, because the window wasn't facing the street—people should not be walking by that side of the house.

"I started to dial 911 as I walked to the front door. I didn't even get to dial the first number when the man charged through my open door."

I watched a lot of America's Most Wanted and Dateline, so right away I was on high alert. I grabbed my phone and I started to dial 911 as I walked to the front door. I didn't even get to dial the first number before the man charged through. He knocked me over and threw me on the floor.

Then I saw the gun. Everything went into slow motion as the barrel came toward my face. He pushed it against my teeth while he wrapped his other hand around my neck. My thoughts were so muddled and rapid-fire. I remember thinking that my purse was nearby. I even remember thinking maybe if I offered him a beer he would go away. I didn't pay any attention to the gun after that. I couldn't. I grabbed onto his arms, trying to get free, and he picked me up off the floor. I'm 5' 8" and I weigh about 160 pounds, so I'm not a petite little flower. I'm a strong girl and I used all of that to flail and scream, but still couldn't get free. His arms were huge. He was built.

At some point I became aware that my front door was still open. I had been a swimmer back in school and as I held on to his arms, I kept flailing and struggling towards the open door—when I got close, I tried to do a big backwards dive out the door, like I would when I was starting a backstroke at a swim meet. I kept screaming as loud as I could, but while I was fighting him I realized that the parking lot next door was empty—I was on my own. There was no one to hear me.

So I just kept screaming and flailing, because even though he was bigger than me, I refused to let him take me down.

Suddenly over my screams, I heard a woman yelling. It was my neighbor coming down the fire escape and yelling "Rape! Call 911! Black male, red shirt!" She worked at a rape crisis center and, unlike me, knew exactly what to say. At this point he was still on top of me as I was lying on my back in the yard. I think he was trying to figure out how to subdue me. But my brave neighbor was there with a 2x4—and when he saw that, he ran down the driveway. I remember thinking at the time, Why didn't I just grab my car keys? My car was right there! I just could have just run him over. I still regret not acting on that impulse.

"It was my neighbor and she was coming down the fire escape and yelling "Rape! Call 911!"

My neighbor instantly called the police. I was wearing a tank top when I was assaulted—I didn't think it was really "revealing" by any standards, but she told me to put on another top before the police got there. If I was more covered up, she urged, they would be more inclined to help me. I followed her advice given how much experience she had with cops, women, and claims of assault—I just wanted everything to be okay. When the police came, they took my account seriously—and I'll never know if simply changing my shirt made all the difference.

They dusted for prints and I went to the police station to look at mug shots, but nothing jumped out at me. The rest of that day was a blur of shock and fear.

I can't even tell you how I got to the ER. I can't remember if the police or if my neighbor took me there or if I drove myself.

What took me days and months to realize was that I was lucky. I only had some bruises from where I fell on the floor, a bad hematoma on my rear, and some bruising on my neck from his grip.

If you're struggling with trauma or PTSD, call this 24-hour confidential hotline for help.