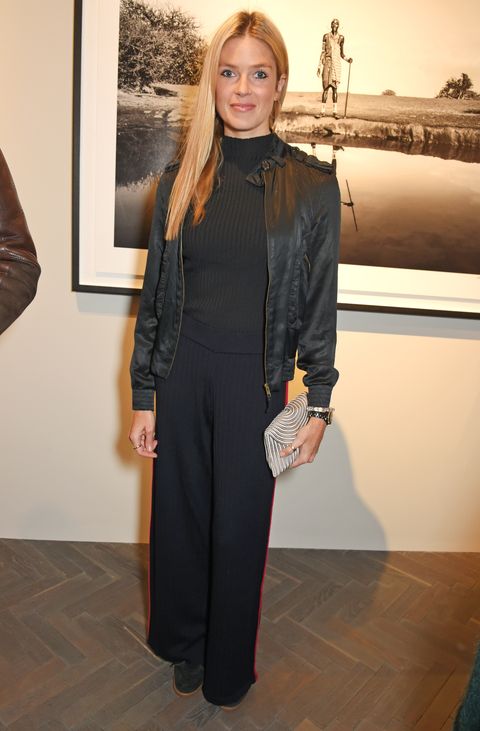 Everyone has a past, even royals. While Prince William only has eyes for Kate Middleton now (and presumably forever more), there was reportedly a time, way back in 2004, when he harbored a crush on someone else.

That someone was Isabella Calthorpe (full name: Isabella Anstruther-Gough-Calthorpe), an objectively beautiful British heiress. Here's what you need to know about Will's former crush.

1. She comes from a very posh family.

2. Her sister also has a connection to the royal family.

Isabella has several siblings, two full (her older sister Georgiana, who is an artist, and her younger brother Jacobi), and four half-siblings, one of whom happens to be actress Cressida Bonas. Cressida and Isabella have the same mother, the same blonde hair, and the same magnetic pull on the men of the royal family. Cressida famously dated Prince Harry from 2012 until 2014.

3. She's best friends with other royals.

In spite of Isabella's awkward history with the royal family (more on that below), she's still tight with the Windsor clan. She's close friends with Princess Beatrice and Princess Eugenie, both of whom attended her wedding in 2013.

4. She is married to Virgin heir Sam Branson.

Isabella attended the London Academy of Music and Dramatic Art from 2003 to 2005 and went on to become a successful stage and television actress in the United Kingdom. Her credits include Stage Beauty, How to Lose Friends & Alienate People, Trinity, and The Prisoner, among others.

6. Prince William (in)famously had a huge crush on her.

In spite of her family pedigree and impressive personal accomplishments, Isabella is most famous in many circles for catching the eye of Prince William in 2004. Royal expert Katie Nicholl wrote in her 2010 book William and Harry: Behind the Palace Walls that William visited the Anstruther-Gough-Calthorpe family home in Chelsea to see Isabella that summer and even contributed to Will and Kate's decision to take a trial break from their relationship at that time.

Will reportedly tried very hard to woo Isabella, but was unsuccessful. She turned him down.

"He had fallen for her in a huge way and wanted to be with her. He propositioned her several times that summer and although Isabella was single, she knocked William back and said it would be too damaging for her and her career," a royal source told the Daily Mail in 2007. "She is a name in her own right and on her way to becoming hugely successful. In her view, being affiliated with William in a girlfriend capacity would be damaging for her.

In William and Harry: Behind the Palace Walls, Nicholl revealed that Kate went so far as to ban Will from contacting Isabella after their 2004 break, writing: "It was obviously the break that William needed, and by Christmas they were back together again, although Kate had a condition. Word had reached her of William’s visits to Isabella, and Kate insisted that William was not to contact her again.

In 2007, a royal source told a similar story to the Daily Mail saying, among other things:

"Isabella was very much on the scene that summer. I would go so far as to say that William dumped Kate because he thought he had a chance with Isabella and Kate knew that. Kate's a tough cookie, though, and stood aside and waited for William to come back to her which eventually he did. Before that, though, he did everything he could to woo Isabella."

"William was madly in love with her but when he knew there was no chance of them getting together he went back to Kate. Kate was very aware of his obsession with Isabella and she was incredibly threatened by her. Isabella is drop-dead beautiful and would leave any girl in the shade. Kate accepted William back again but on the condition that he would not speak to Isabella again."

8. She still attended the royal wedding in 2011 though.

After all that, Isabella was ultimately on the guest list for Will and Kate's royal wedding in 2011, so there seem to have been no hard feelings in the long-run.

Kayleigh Roberts Contributor Kayleigh Roberts is the weekend editor at Marie Claire, covering celebrity and entertainment news, from actual royals like Kate Middleton and Meghan Markle to Hollywood royalty, like Katie Holmes and Chrissy Teigen.
This content is created and maintained by a third party, and imported onto this page to help users provide their email addresses. You may be able to find more information about this and similar content at piano.io
Advertisement - Continue Reading Below
More From The Ultimate Guide to the Royal Family
Queen Left a Handwritten Note on Philip's Coffin
The Queen Said Grief Is the Price We Pay for Love
Advertisement - Continue Reading Below
All of the Photos from Prince Philip's Funeral
The Queen Wore This Brooch to Philip's Funeral
Kate Middleton's Nod to Diana at Philip's Funeral
Queen Elizabeth Appears at Prince Philip's Funeral
Harry Back With Will & Kate at Philip's Funeral
How Prince Harry and Meghan Honored Philip Today
A Look Back at Princess Anne's Life in Photos
A Look at Royal Family Portraits Through the Years