Former Oscar winner and current Oscar nominee Mahershala Ali has become a mainstay on the awards circuit this year for his riveting performance as Dr. Don Shirley in Green Book. If he wins an Oscar in 2019, he will be the black actor to win more than one Oscar in record time (breaking Denzel Washington's record of wins in 1989 and 2001).

Yet, in the face of all the accolades and attention, Ali always makes sure to give credit to his wife, Amatus Sami-Karim, and the family they're building together. Here's everything we know about the super-private couple and their life together.

On her website, Sami-Karim calls herself a "performative conceptual artist." With a degree from the Tisch School of the Arts and a year of acting at RADA, she has done film compositions, an EP, music for the play "Sunset Baby," and most recently sound design and music for the off-Broadway play "The Homecoming Queen." She was nominated for a Drama Desk award for her work.

Very thankful to be nominated for music and a part of this production. ...Song collaboration, #Nolufefe!!! @gozeface 🙏🏽❤️ Homecoming Queen. @awoyetimpo #Emily Auciello!!!!😘

She's a feminist and activist.

Sami-Karim feels strongly about promoting women's rights, rights for minorities, gun control (which she says is a personal issue for her), and voting rights, among others, on her social media. .

She met Ali at Tisch.

Ali mentioned in a Bustle interview that he and his wife go way back, and she's been supportive from day one. "She and I have known each other for a really long time [about] 17 years. So, at this point, she's seen a big shift in things, but at the same time, she'll ground me real quick if I start feeling myself a little too much. She's very real, like, seriously."

She's so supportive of Ali.

In the past few months, Sami-Karim has been sharing photos of Ali in his latest project— season 3 of True Detective. It's just the latest example of her unmitigated support of her husband. She regularly posts to social media to support Ali on his birthday and important events, and is his biggest cheerleader.

Sami-Karim says Ali is as much a support for her as she is for him—a true partnership for the famous duo.

Apparently Sami-Karim gets Ali to branch out sartorially. Ali told Elle in an interview. "My wife, she'll always kind of push it a little bit...She got me these pants that had big, horizontal grey and black stripes. And I was like, 'You know, I just feel like I'm a little too old for those now.' They felt like I should be 19 in those, but she's got good taste."

She hits the awards circuit, too.

At this year's Golden Globes, she recorded Ali thanking people in his life and showed what it looks like to have the award engraved with his name.

They have a daughter together.

In 2017, Ali and Sami-Karim welcomed their first child, a baby girl named Bari Najma Ali. She was pregnant during awards season, and gave birth four days before Ali won an Oscar. Ali called her a "soldier" and said she had supported him all throughout the process.

#MahershalaAli of #Moonlight: "It's not about you. it's about these characters." #Oscars pic.twitter.com/WWmxPR8EGx

On the name, "We were looking to do something simpler," Ali told Us Weekly. Sami-Karim has since given us glimpses of adorable Bari. Coolest parents? Or coolest parents ever? 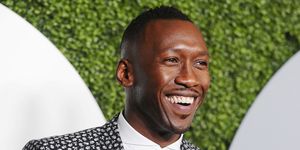 Mahershala Ali Is in Talks for 'True Detective' 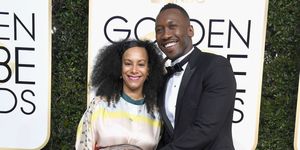