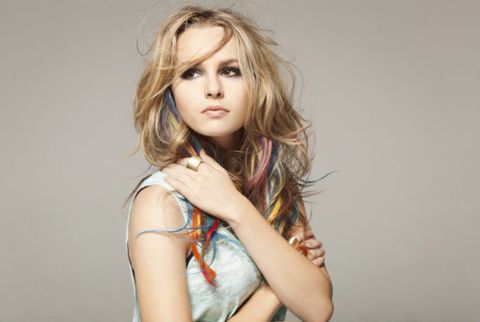 Sitting across from Bridgit Mendler, fresh-faced and hair loosely pulled back poolside at LA's chic W Hotel, you would never know Disney royalty was in your midst. Mendler stars as the title character on one of the Disney Channel's hottest properties Good Luck Charlie, which will end it's run in early 2014 after four seasons. The show made Mendler a household name with kids and tweens who squeal at the sight of her, and helped launch her blossoming singing career – her debut single 'Ready Or Not' landed on the Billboard Hot 100 last year. Any of this sound vaguely familiar? (We're looking at you, Miley, Selena, Demi). We were officially smitten when wemet up with Bridgit for a quick chat after a table read for one of GLC's last episodes just before kicking off her summer concert tour. Read on to see What's On Bridgit's mind:

Actually, what is on your mind Bridgit: Food. All the time.

Twitter feed: Pictures of my garden or puppy whether they want them or not!

Nightstand: A few books I'm trying to remind myself to read!

Desktop/screensaver: My boyfriend and his cute puppy

Facebook feed: Only when my friends hack me to say something weird (I think I was thinking of Facebook status!)

Bed:Many pillows and a giant elephant stuffed animal I got for Valentine's Day :-)

This content is created and maintained by a third party, and imported onto this page to help users provide their email addresses. You may be able to find more information about this and similar content at piano.io
Advertisement - Continue Reading Below
More From Celebrity
Harry and Will Have Been Arguing for Months Now
Prince Harry Doesn't Regret His Oprah Interview
Advertisement - Continue Reading Below
Archie Has a Distinct American Accent, Apparently
Hailey Wore a Nude Blazer and Micro Dress
Gabrielle's TikTok About Her Prom Date is So Funny
Victoria Beckham Shuts Down 'Spice World 2' Rumors
Kendall Jenner Shared Her Experience of Anxiety
'The Voice' Star Blake Shelton Opens Up About Gwen
Sussexes Share New Birthday Photo of Archie
Charles Is Still Upset Over Harry's Oprah Tell-All