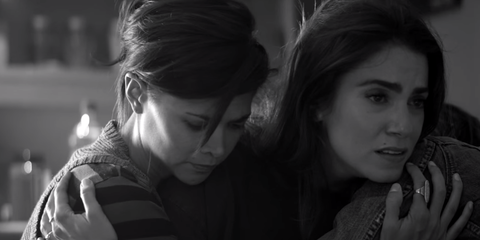 Update, 9/18: In conjunction with The Hunting Ground, a documentary about campus sexual assault, Lady Gaga has released the powerful video for "Til It Happens to You."

The visuals depict three separate stories of sexual assault, all shown in graphic detail—difficult to watch, but as the trigger warning states, the "emotionally unsettling" scenes "reflect the reality of what is happening daily on college campuses."

"I hope that this PSA, with its raw and truthful portrayals, will send a clear message that we need to support these courageous survivors and end this epidemic plaguing our college campuses," director Catherine Hardwicke said in a statement. Lady Gaga, who tweeted that a portion of the proceeds will go toward survivors' organizations, also reinforced the PSA's closing sentiment of togetherness and understanding.

Original story, 8/22: While in the process of recording a new pop album, Lady Gaga found herself singing a slightly different—and much more emotional—tune.

The singer teamed up with writing legend Diane Warren to pen the ballad "Til It Happens to You," a heartbreaking interpretation of a sexual assault survivor's experience.

After making an impact as the theme for The Hunting Ground (a documentary about campus rape), the song will now be used for a Catherine Hardwicke-directed PSA aimed to "raise awareness for campus sexual assault," according to The Hollywood Reporter.

"The video PSA, shot in black and white, casts an emotional spotlight on young women in vulnerable situations that college students will readily recognize," THR explained of the clip, which will be released in the coming weeks as fall semesters begin.

Listen to "Till It Happens to You" below: