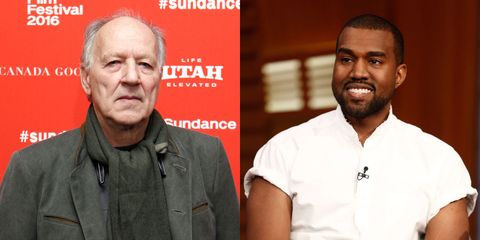 Since its release in June, the collective Internet has been putting in its two cents on Kanye West's "Famous" music video. The onslaught of opinions from every armchair critic out there has created quite the noise, but the latest input is one you'll actually want to hear.

In an interview with The Daily Beast, Werner Herzog—esteemed German auteur, existential thinker, and man with a legendary voice—gave his artful analysis on what could easily be considered the most controversial music video of the year. And unlike many others out there, he loved it.

"[Kanye] is doing something that I've always tried to get across to people who want to make movies," Herzog declares, the camera panning across the naked bodies of the celebrity wax figures.

He is clearly a fan, regardless of how unfamiliar he might be with some of the faces featured in the video. "I do not know about quite a few of them at all," Herzog admits as the camera lingers on Taylor Swift, then Caitlyn Jenner. "But of course, Donald Trump and Rihanna I have seen. And who else is in it? The entertainer who was accused of sexual misconduct with women. What's his name? Bill Cosby."

"It's deceivingly well-cast," he adds. 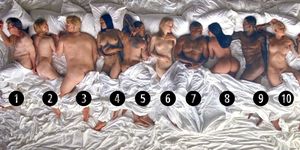 A Who's Who Guide to Kanye's 'Famous' Video

"You keep thinking, are these people for real or are they doppelgängers? And what could be the story of them? What are they doing? How have they partied, or what brought them together? All of a sudden, the rapper gives me the chance to completely go wild on my own story…. It is very, very interesting."

"The fact that there's just breathing and imagining is wonderful about it," Herzog gushes. "This is very good stuff."

Granted, this is also the same man who believes "the common denominator of the universe is not harmony, but chaos, hostility, and murder." So do with that what you will.

As the clip comes to a close, Herzog offers further praise for the rapper. "So Kane West—" the interviewer corrects him on the pronunciation of West's name— "Oh, Kanye West—sorry. If he applies to my Rogue Film School with this film, I would invite him, because I have never seen anything like this, and it really has caliber."

"It shows us that the Internet can be well beyond 60-second cat videos," he adds in final thought. "Although I like them as well." (Honestly though, who doesn't like cat videos?)

As you could've guessed, Kanye West was delighted by Herzog's glowing review of his work and shared the link on his Twitter page.

Watch Herzog's complete critique of "Famous" in the video below:

This content is imported from Third party. You may be able to find the same content in another format, or you may be able to find more information, at their web site.
Sarah Lindig Senior Digital Editor, Special Projects Sarah Lindig is the senior digital editor, overseeing special projects for Harper's Bazaar.
This content is created and maintained by a third party, and imported onto this page to help users provide their email addresses. You may be able to find more information about this and similar content at piano.io
Advertisement - Continue Reading Below
More From Music
Reese & Ryan's Son, Deacon, Drops His First Single
Life Advice From an Icon, Cher
Advertisement - Continue Reading Below
J.Lo Is Basically Naked on Her New Single Cover
Karaoke Songs Anyone (Yes, Anyone) Can Rock
Um, This Dude Claims Lady Gaga Stole “Shallow”
Sad Taylor Swift Is the Best Taylor Swift
Jennifer Lopez's NYC Concert Was Evacuated
Miley Cyrus Channels Britney Spears' Iconic Look
Ginger Spice Apologizes for Leaving Spice Girls
Fans Walked Out of the Spice Girl's Reunions Tour