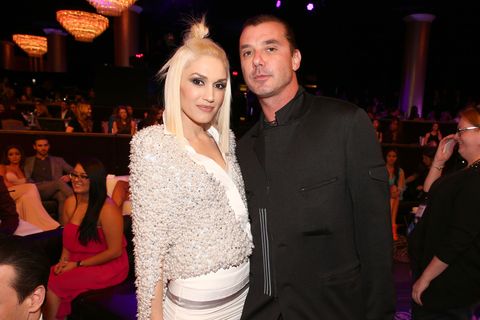 Gwen Stefani released a raw, emotional new single called "I Used to Love You," which is definitely about her divorce from Gavin Rossdale. And while fans everywhere dried their tears over the music world's traumatic breakup, Stefani says that it gave her the creative drive she needed to make new music. Appearing on a 97.1 AMP radio show, hosted by her Voice coworker Carson Daly, she opened up about her new lease on life post-split.

Stefani told Daly said that everything is different now, but in a good way. "My life basically blew up in my face and so I'm in this new life and it's pretty awesome, I have to say," she said. "Everything just feels new. I just feel inspired. I don't know how else to describe it."

She said it was the trauma of divorce that helped her get over writer's block. "I don't have anything to hide. Everybody knows that I was married forever and now I'm not," she said. "On the way to the studio, that first time, I didn't want to go. I wanted to be in my bed, crying. And I did cry all the way down Santa Monica. 'What am I doing? Why am I doing this?'" But she pressed on, and write 19 songs in eight weeks; she's now up to 25 songs.

The singer has always wrapped up her emotions in her music, and says it still affects her to this day. "It hurts [to sing No Doubt songs]," she said. "It's weird because for me, each song is capturing a moment in time and every time you hear it, it's like you feel it again.It doesn't go away. If I'm singing 'Don't Speak,' all of a sudden I'm associating that with what's going on with me now, so, it's very intense."

First Adele, now Gwen—looks like the holidays will be chock full of breakup anthems this year.

Listen to the full interview below: