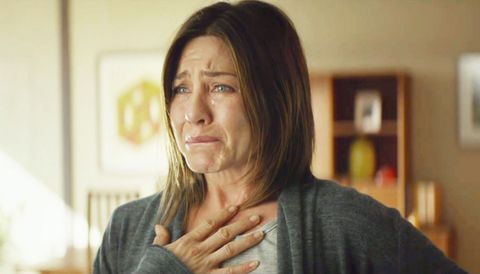 Talk about finding love in a hopeless place. The Razzie nominations are in, and for the first time ever, the awards show that backhandedly celebrates mediocrity or worse is honoring former winners who've gone on to give performances that don't deserve $4.79 fruit trophies spray-painted gold.

Among the potential recipients of the Redeemer Award are Jennifer Aniston for Cake, Kristen Stewart for Camp X-Ray, and Ben Affleck for Best Split-Second Peen Cameo in a Drama Gone Girl.

On the more traditional butt-of-the-joke end, films such as The Legend of Hercules, Transformers: Age of Extinction, and Blended picked up multiple nods, along with Cameron Diaz (for both lead actress and supporting actress), Drew Barrymore, and Melissa McCarthy.

Watch the announcement video below, and keep scrolling for the full list of nominees.

Update, 2/23: And the Razzie goes to...Cameron Diaz, for starring in such cinematic, uh, things as The Other Woman and Sex Tape. (She was nominated for Worst Supporting Actress, too, but no dice in that category.) Taking home the Worst Actor title was Kirk Cameron, whose film Saving Christmas won a mystifying four awards total, while Ben Affleck scored the least-sarcastic win of the night: the Redeemer, "for Gigli to Oscar darling for Argo and Gone Girl." Congrats, everybody, and may you not be in the running next year.

Who Won the Golden Globes? Women.

Chelsea Peng I'm Chelsea Peng, the assistant editor at MarieClaire.com.
This content is created and maintained by a third party, and imported onto this page to help users provide their email addresses. You may be able to find more information about this and similar content at piano.io
Advertisement - Continue Reading Below
More From Celebrity
Elizabeth Hurley, 55, Shows Off Toned Abs On Insta
Keira Knightley Won't Do Nude Scenes Filmed by Men
Advertisement - Continue Reading Below
Kourtney Kardashian Is Dating Travis Barker
Priyanka Chopra Jonas Talks Her New Memoir
Priyanka and Nick on Their Quarantine Quality Time
Priyanka Pulls Back the Curtain
Sussexes Will Return to Social Media, Harry Said
A-Rod Celebrated J.Lo's Inauguration Performance
The 6 Most Expensive Royal Wedding Dresses
Inside Kitty Spencer's Stunning £19 Million Home