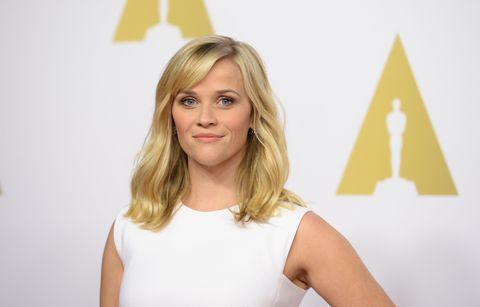 It's no secret that Hollywood is stilled riddled with sexism, and between the Sony hack emails (in which Aaron Sorkin said women have less difficult roles than men) and the glaring paucity of female nominees at the Oscars this year, it's a sad truth that has never been as obvious as it is now.

Speaking at the annual Academy Award nominee luncheon on Monday in Los Angeles, Oscar-winning actress Reese Witherspoon addressed the movement for better female roles, revealing how watching six of her favorite actresses "fighting over a really crappy role in a movie" inspired her to take action by creating her own production company.

"We deserve better," she said. "It's great to speak up, but what I really think is you've got to do something."

And, indeed, Witherspoon's actions speak louder than her words. She produced Gone Girl, which is largely considered a sardonic tale of revenge on the patriarchy, and produced and starred in Wild, a feminist masterpiece about a woman trekking the Pacific Crest Trail alone following the death of her mother.

She described the latter as the most challenging physical and emotional endeavor of her professional life, which is perhaps why it earned her an Oscar nomination for Best Actress. But Witherspoon is definitely not stopping there.

"I set out with the idea that I wanted to develop material that has strong female leads. I wanted to make movies about what I want to put out into the world—put some good into the world," Witherspoon said. And that's precisely what she's going to do.

This content is created and maintained by a third party, and imported onto this page to help users provide their email addresses. You may be able to find more information about this and similar content at piano.io
Advertisement - Continue Reading Below
More From Celebrity
There's Drama Over Prince Harry's Funeral Attire
Jennifer's Rep Breaks Silence on Adoption Story
Advertisement - Continue Reading Below
Princess Eugenie's Prince Philip Tribute
Serena Williams Signed a Major TV Deal With Amazon
Chrissy Wrote Luna the Sweetest Birthday Message
Prince Harry Has Met Princess Eugenie's Son August
The Queen Returns to Work After Philip's Death
A Brief History Lesson on Brad and Jen
Rihanna and A$AP Were Spotted on a Date
Prince Harry Is "Really Missing" Meghan Markle