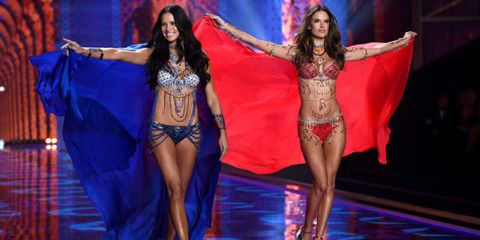 Karlie Kloss is ready for something new—and those Victoria's Secret Angel wings seem to be in the way. The 22-year-old will be starting school in the fall and will be moving on from being a VS Angel.

"Karlie is stepping down from her Angel duties," a source told People. "She's got a busy but exciting year ahead and the decision came down to timing. She'll be focusing on her modeling career, new business opportunities and NYU starting in the fall."

The model will be enrolling in NYU's Gallatin School of Individualized Study. Going to college has apparently been something that she's "wanted to do for a very long time." But even though the blonde will be continuing her studies, she admits she won't be curtailing her main career as of yet: "I'll still be working full-time."

"After I posted the news about @karliekloss leaving VS I got a number of texts asking me why I hadn't said anything about Doutzen @doutzen leaving at the end of last year," Razek wrote in the caption. "Fair question. The simple answer is I should have. Doutzen had a lucrative opportunity in Europe and it would have conflicted with her VS obligations. So, at her agencies [sic] request, we released her from contract. There was no conflict. No animosity. None of the nonsense I've read on Instagram. She had a great business opportunity, and I wanted to be fair to someone I adore and respect. That's all. I honestly believe Doutzen is one of the most stunningly beautiful people in the world. And I always will. I have told her that many times. Now you know."

Update, 3/5: Practically-OG Angels Alessandra Ambrosio and Adriana Lima aren't going anywhere...yet, according to the New York Daily News. Both had reportedly been planning to follow Karlie Kloss and Doutzen Kroes to greener pastures, but new contracts will keep at least Lima from walking so soon. Ambrosio, on the other hand, hasn't signed yet, but the source says she's close to sealing the deal.

If this is all true, they'll keep their wings at least until the next Victoria's Secret show.

Samantha Leal Senior Web Editor I'm Sam, the senior editor at MarieClaire.com.
This content is created and maintained by a third party, and imported onto this page to help users provide their email addresses. You may be able to find more information about this and similar content at piano.io
Advertisement - Continue Reading Below
More From Celebrity
Naomi Osaka Lit the Olympic Cauldron in Tokyo
John Legend Performed "Imagine" for the Olympics
Advertisement - Continue Reading Below
Simone Biles Is Honored With Her Own GOAT Emoji
Kate Winslet Reveals Her Favorite Red Carpet Look
Margot Robbie Had a Life-Size Cutout of John Cena
Jennifer Lopez and Ben Affleck Are IG Official
Celebs Share Their Emotional Infertility Stories
14 Candid, Unseen Photos of the Royal Family
Rare Photos From Diana and Charles' Wedding
Ariana's Former Home Has an IMAX in the Building