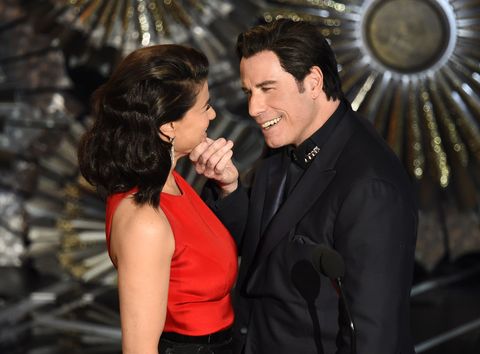 Remember when John Travolta called Idina Menzel "Adele Dazeem" at last year's Oscars? The embarrassing gaffe basically made Menzel a household name (or, made her newly minted doppelgänger a household name...), and Travolta a temporary laughingstock.

At this year's Oscars, Menzel exacted her revenge by introducing Travolta on stage as "Glom Gazingo." It was an obviously pre-planned moment, but was cute and satisfying nonetheless...until Travolta got weird. (As he is wont to do.) This face-touching kinda creeped us out:

But they patched things up in time to give the award for Best Song to two guys named John Stephens and Lonnie Lynn, which are apparently what John Legend and Common go by at the Oscars. Who knew?

Speaking to the moment later on The Jimmy Kimmel show, Travolta explained the reason for his gaffe in the first place: the name had been spelled phonetically, and well, we all know the rest.

Watch the full moment Oscars moment below, via Time, then check out Travolta explaining the goof to Kimmel:

There Were Some...Bizarre Things Happening on the Oscars Red Carpet Tonight

The Best Behind-the-Scenes Instagrams from the Oscars

Advertisement - Continue Reading Below
More From The Oscars 2020
Twitter Is Livid Over J.Lo Not Getting Oscar Nom
Wells Adams and Sarah Hyland at the Oscars
Advertisement - Continue Reading Below
Bradley Cooper's Ex-Wife Comments on Gaga Drama
Bradley Cooper & Irina Shayk's Body Language
Did Bradley Cooper Skip the Oscars After-Party?
Ciara Debuts a Gorgeous Bob With Wispy Bangs
Kendall Jenner's Oscars Dress Was Nearly-Naked
Priyanka Chopra and Nick Jonas at the Oscars Party
Angela Bassett, We Are Not Worthy
The Most Awkward Moments from the 2019 Oscars