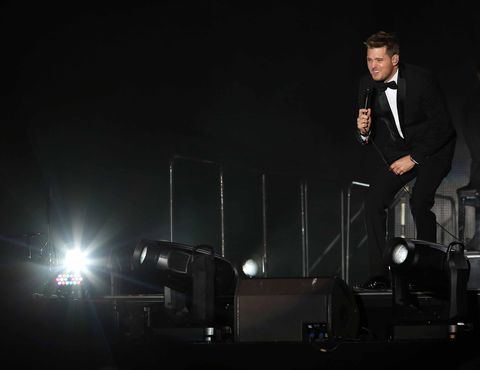 Update: Bublé has issued a statement to Us Weekly in which he says he didn't intend to "disrespect women or be insulting to any human being."

"I regret that there are people out there who found the photo offensive," he said. "That was not and is not my intention. Women are to be celebrated, loved, respected, honored and revered. I've spent my life believing that and will continue to do so."

While vacationing in Miami, Michael Bublé posted an Instagram photo depicting himself with his arms crossed and, behind him, a woman wearing black shorts standing with her back to the camera. Bublé's wife Luisana Lopilato snapped the pic, which you can see below.

Lots to unpack here, obviously. 1) Why are they in Urban Outfitters? 2) At the very least, this is in poor taste, no? Some social media users are arguing it goes beyond creepy and into body-shame-y and sexist.

@michaelbuble Did you ask her permission to post that? Would you say what you hashtagged to her face?

Contrary to what many other Instagram and Twitter users are saying—that she "asked for" the attention by appearing in public with part of her body exposed—the real problem here isn't her clothing. It's the (frightening) idea that, because of social media, any of us can step outside and wind up a meme on the Internet. And maybe that's why everybody (but especially a celebrity because you'd think he'd know how it felt) should think twice before posting any gawky, reduce-a-human-to-his/her-looks-then-share-it-with-everyone-type photo. Not your best moment, Bublé. Not your best.

21 Women Who Expertly Shut Down Their Body Shamers