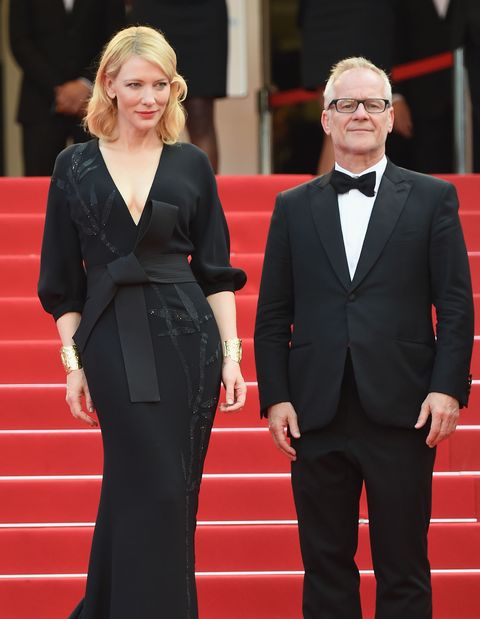 The festival's director, Thierry Fremaux, spoke out about the dress code at a Women in Motion talk, calling the ordeal "bullshit," according to The Hollywood Reporter.

"There is a rumor that the festival obliges women to wear heels," he said. "It's a rumor, it's not true." He then went on to say that it (and the subsequent controversy) were due to a security guard with an "excess of zeal."

Update, 5/20: Emily Blunt's co-stars in Sicario, Josh Brolin and Benicio del Toro, sadly did not wear heels to the premiere of their film in Cannes. Why is it sad that two men weren't subjected to the pain that caused by modern-day female stilts? Because they had *promised* to wear them.

In the same press conference where Blunt made her disapproval of the "no flats" policy known, director Denis Villeneuve commented, "In a sign of protest, Benicio, Josh, and I will walk the stairs [of the Palais] in high heels tomorrow."

But they didn't. As Vulture reports, none of the men actually followed through on the plan, with del Toro explaining that he did attempt to in earnest.

"I tried!" he said. "I tried to find high heels, but, sadly, I can't walk in them." Been there, del Toro. But apparently for female goers, they don't have a choice. That's kind of the point.

Original story, 5/19: The Cannes Film Festival—that thing 95% of us mispronounce (it's "can," apparently)—is known for its red carpet moments and couture gowns. So you might not be surprised that it has a pretty strict dress code—one that found some women actually *turned away* from a premiere after they showed up wearing rhinestone flats instead of high heels.

It's basically a case of Mean Girls: French Riviera—the women, reportedly in their 50s and some with medical conditions, were told they couldn't attend the premiere of Carol, starring Cate Blanchett and Rooney Mara, because of their footwear. According to Harper's Bazaar UK, a festival spokesperson said it was "obligatory for all women to wear high heels to red-carpet showings."

Emily Blunt, ever the voice of reason, decided to pipe up about the incident at a press conference for her new film Sicario. "I think everyone should wear flats, to be honest," she said, according to Variety. "We shouldn't wear high heels anymore. That's just my point of view. I prefer to wear Converse sneakers."

Samantha Leal Senior Web Editor I'm Sam, the senior editor at MarieClaire.com.
This content is created and maintained by a third party, and imported onto this page to help users provide their email addresses. You may be able to find more information about this and similar content at piano.io
Advertisement - Continue Reading Below
More From Celebrity
Serena Gave Daughter Olympia a Tennis Lesson
Meghan Shared What Helped Her Through 2020
Advertisement - Continue Reading Below
Kylie and Travis Are "Very Close" After Reuniting
Meghan's Book 'The Bench' Tops Best Sellers List
Kaavia Talks to a Bee in an Adorable IG Video
David Harbour on Being Stepdad to Lily Allen's Kid
Ben Affleck Is "Getting to Know" J.Lo's Kids
Salma Hayek's Owl Had a Mishap With Harry Styles
Princess Diana Always Dreamed in Living in Cali
Angelina Jolie Was Spotted Leaving Her Ex's Place