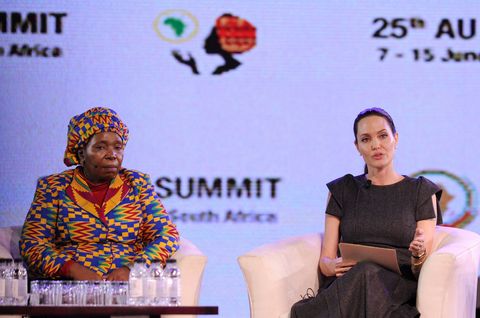 For years, Angelina Jolie has been using her sizable star power to speak up for change around the world. Just this week, the Oscar-winning actress took the stage with an impressive group of leaders to fight for women's rights around the world.

People reports that Jolie was a part of the African Union's meeting in South Africa. She sat on a panel about Women, Peace, and Security alongside delegates like African Union chairperson Nkosazana Dlamini-Zuma, Senagalese activist Bineta Diop and former British foreign secretary William Hague, who co-founded the Preventing Sexual Violence in Conflict initiative with Jolie.

Jolie, who is a UN special envoy on refugee issues, said that violence against women is a "global epidemic," that is treated as a shockingly low priority around the world. "Women and girls are bearing the brunt of extremists that revel in treating them barbarically," she said. "This is inextricably linked to our overall failure to prevent and end conflicts worldwide, which is causing human suffering on an unprecedented level."

The theme of the summit was women's empowerment, and Jolie had some spot-on ideas about how to empower more women everywhere: make it a team effort. "We need policies for long-term security that are designed by women, focused on women, executed by women–not at the expense of men, or instead of men, but alongside and with men," she said. "There is no greater pillar of stability than a strong, free and educated woman, and there is no more inspiring role model than a man who respects and cherishes women and champions their leadership." Preach.

This content is created and maintained by a third party, and imported onto this page to help users provide their email addresses. You may be able to find more information about this and similar content at piano.io
Advertisement - Continue Reading Below
More From Celebrity
Meghan Said She Was "In Tears" Over Her BLM Speech
Chrissy Teigen Couldn't Hear Her Baby's Heartbeat
Advertisement - Continue Reading Below
Taylor Swift Fans Troll Jake Gyllenhaal on IG
Meghan Shared a Quote She Displayed in Her Room
Duchess Kate Spots Sleek Sportswear for Outing
Brooke Shields, 55, Shows Off Toned Legs On Insta
Amanda Seyfried Gave Birth to Her Second Child
Chrissy Teigen Received Two Blood Transfusions
Attenborough's Gift to George Sparks Controversy
Meghan and Harry Respond to Reality Show Rumors