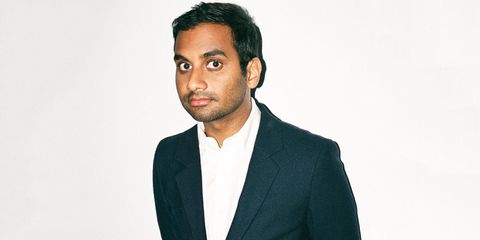 "In stand-up, you don't have time to really explore certain ideas as much as you'd like, because it has to be quick and fast-paced," Aziz Ansari says. "But with a book, you have more room to suck people in."

I'm in a room alongside other journalists, sitting at a table filled with small tea sandwiches and cookies that you'll need at least four of to come anywhere close to being somewhat full, listening to the hilarious star and Parks and Rec alum speak about his book on modern romance. The title? Modern Romance. (Simple.) The book, which, if you're like me, you read entirely in an Aziz/Tom Haverford voice in your head, was helped along by sociologist Eric Klinenberg, and takes a hilarious look at everything that relationships nowadays encompass: flirting, text messages, and yes—Tinder.

In an open discussion, we asked the comedian everything from the way dating has changed to what it's like being a male author looking at relationships.

What have you seen in your research when it comes to the younger dating/hook-up culture?

"Someone my age—I'm 32—if they don't get a text back in a couple of hours they're like 'What's going on?' But if someone in college doesn't get a text back in like, a minute, they're like 'WHAT THE F*CK? THEY HATE ME. Nooooo.' And it's so interesting to talk to these young people, because their views on things were just so different. When we asked younger women, what would you think if a guy called you? Women my age are like, 'Oh, wow, I think that'd be really refreshing and be really thoughtful and I'd really appreciate it.' And we asked younger women, 'What if a guy called you?' They were like, 'Uhhh, I don't know what I'd say! Why would they do that? That'd be terrifying. Why are they calling me? It'd have to be an emergency or something. Nooo, I don't want that.' And it was interesting to see the differences based on age. So, point being: Young people are crazy."

What was the biggest takeaway you got from working on this book?

"One, we're all in it together. Everyone is sitting there, staring at their screens in a dilemma that seems totally their own, but in a way, everyone's dealing with the same nonsense. There's a story I tell in the book, how at my one-year anniversary, my girlfriend gave me this book that like had all of the text messages we had ever sent to each other. And in some of the beginning ones she made little notes about what was going on in her head and stuff, saying, like 'Oh, I was really nervous here, because I said this and I thought it had offended you,' and I was like, 'wow, that's so funny, because I remember sending the message afterwards and being really nervous about it.' And you end up realizing you're so worried about this, and the other person is probably worried as well. We're all in the same boat together."

"Everyone is sitting there, staring at their screens in a dilemma that seems totally their own, but in a way, everyone's dealing with the same nonsense."

"The other thing, there's one way of seeing what we have now—seeing it as so many options out there, and that it's very hard, but I talked to a lot of older people out there, in retirement homes, and when you talk to those people, especially women, and they talk about being about 20 years old and living with their parents, and they said their husband was some guy they met in the neighborhood who seemed nice, and they introduced them to their parents, and they said, 'Oh, yeah, this guy doesn't seem like a murderer,' and they got married pretty quickly afterwards, and they didn't have a deep connection with them, and they described how they lived with their parents and they couldn't do anything, and how they couldn't really become an adult until I got married. And I would ask them, 'Do you think part of the reason you got married was just to get out of the house?' And they were like, 'Yeah.' And some of them were very happy and loved their husbands very much, but some of them had part of their lives where they were stuck with this person that they didn't have a connection with, which is kind of sad. All of them, though, seemed to have this longing for this period in their lives where they were just independent adults, where they're living their lives and they're having fun, and a lot of the women I spoke with didn't have the option to go to college or start their own careers. And everyone now has this period to just dick around, and have fun, and maybe you get into a relationship later or whatever, but young people now really take for granted that a lot of people didn't have that stage of their life we call emerging adulthood, and I think we're really fortunate to have it."

In your book, you explore initiating a relationship, but most of the data was about men asking women. Why do you think it's still men leading the charge?

"Really, it would just be speculation on my part. But when you look at the numbers, because we would do these focus groups...still, overwhelmingly, the men would make the first ask. Overwhelmingly men still are expected to make the first move. It seems to be the way the dating culture has been set up."

In your standup, you read romantic/flirting text messages from your audience members. What's been the biggest takeaway from that?

"The reason that bit works, and I did that on every show, was everyone's was interesting. Because we've all been in that situation of just the continuous texts, and it's a problem only for those people in this era. You have this whole relationship that develops on the phone, where your perception of who they are is formed by messages, and it's always really interesting."

"You have this whole relationship that develops on the phone, where your perception of who they are is formed by messages."

What was the one exchange you remember as a standout?

"There was one not long ago. It was very vulgar. But this woman was kind of booty-calling this day, and was like, hey what are you up to? And he was like, oh nothing, just got home. And she wrote something like, well, what do you think my p*ssy is up to right now, but her avatar was Channing Tatum. So it seemed like Channing Tatum was asking about his p*ssy..."

"We're so quick to move on, because we have more options than anyone has had before. And it's a mistake, I think. Because people are amazing, and have more to show you than just in one session of dates. And the more time you spend with people, the more you can form a deeper connection. So if you go out with someone and you thought it was a 6/10, maybe give it one more shot."

Are there any implications about you being a man writing about love and dating, when this is so frequently written about by women and often read by women?

"It's not like, 'oh if you're a dude, this is how you f*ck ladies, and if you're a lady, this is how you lock down a man,' this is like, 'hey if you're a lady or a man, you can enjoy this book.' We're all dealing with this same nonsense. This is what it's all about. It's not really, I mean obviously I'm a guy and have experience from the male perspective, but I talked to a shit-ton of women, and tried to make it so it's not just for one gender."

You have this part in the book where you talk about how men shouldn't text just, 'Hey', to a woman.

"Yeah, totally. If you see it as a context of a guy, it seems harmless. But when you interview hundreds of women and you see it from their end and their phones, you see there's like all these guys texting, 'Hey' or 'What are you doing?' and it's nothing. So when we broke it down, most women responded to asking to do a specific thing at a specific time. Which seems like common sense, but so few guys do it. And using a bit of humor. That helps."

You can buy Modern Romance now on Amazon.

Courtesy publisher
Samantha Leal Senior Web Editor I'm Sam, the senior editor at MarieClaire.com.
This content is created and maintained by a third party, and imported onto this page to help users provide their email addresses. You may be able to find more information about this and similar content at piano.io
Advertisement - Continue Reading Below
More From Celebrity
Gigi Hadid Says She Voted With Her BB
Will Asked His Uncle to Talk to Harry About Meghan
Advertisement - Continue Reading Below
Why the Queen Denied Meghan's Wedding Tiara Pick
Will & Harry's Reactions to Their Parents' Divorce
LOL, Kelly Ripa Comments on Her Hubby's Bulge 🍆
Adele Talked About Her Weight Loss on 'SNL'
J.Lo Steps Out in the Perfect Autumnal Look
Harry & Meghan's Drama Won't Be on 'The Crown'
Will's Talk with Charles That Led Him to Kate
The Queen Saved Will from a Breakdown as a Teen